Russia shelled several neighborhoods in the Ukrainian capital on Wednesday, killing one person and injuring at least six others, according to city officials, as fierce fighting raged on Kyiv’s outskirts against Russian forces seeking to encircle the city.

Kyiv mayor Viltali Klitschko said the casualties were the result of an airstrike that hit a car park outside a shopping mall in Kyiv’s Podil district.

“Dear Kyiv residents! The enemy is continuing to shell the capital,” Klitschko said on Telegram.

Earlier in the day, artillery fire hit a residential neighborhood in the Nyvky district.

A house was destroyed and caught fire, several buildings were riddled with shrapnel and had their windows blown out by the strike, leaving four people injured, according to city town hall.

The attacks came as Ukrainian forces gained some ground against invading Russian troops attempting to surround the city, according to Klitschko.

Speaking to reporters, Klitschko said there were battles raging on the northern and eastern outskirts of the city, and that “the small city of Makariv and almost all of Irpin is already under the control of Ukrainian soldiers.”

Irpin borders Kyiv to the east, and Makariv is located some 50 kilometers (30 miles) to the west.

A Ukrainian news agency spoke of a possible encirclement of Russian troops at Irpin, as well as Bucha and Hostomel, which are located in the western outskirts of Kyiv.

Klitschko said he didn’t have any more detailed information of ongoing Ukrainian counteroffensives.

A toll kept by city authorities puts the civilian death toll in the capital at 73, including four children, since the start of the invasion. Another 297 people have been wounded. 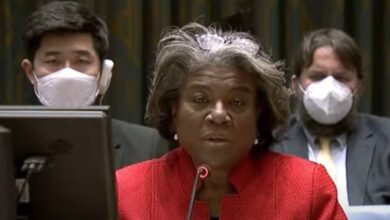 US ‘concerned’ about possible Iran missiles for Russia