A team of Israeli archaeologists has made a “once-in-a-lifetime” discovery of a burial cave dating back to ancient Egyptian Pharaoh Rameses II.

The discovery was made on Tuesday when the group found pottery pieces and bronze artefacts dating back to the reign of the ancient Egyptian king, who died in 1213 BC, the Israel Antiquities Authority (IAA) announced on Sunday.

The cave was uncovered on a beach when a mechanical digger working at the Palmahim national park hit its roof, with archaeologists using a ladder to descend into the spacious, man-made square cave.

In a video released by the IAA, gobsmacked archaeologists shine flashlights on dozens of pottery vessels in a variety of forms and sizes.

Bowls – some of them painted red, some containing bones – could be seen in the cave along with footed chalices, cooking pots, storage jars, lamps and bronze arrowheads or spearheads.

The objects were burial offerings to accompany the deceased on their last journey to the afterlife, found untouched since being placed there about 3,300 years ago.

At least one relatively intact skeleton was also found in two rectangular plots in the corner of the cave. 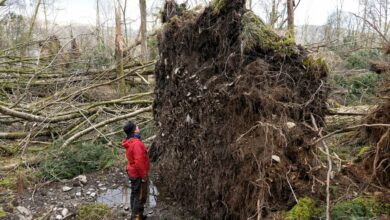