Oil prices rose on Friday as President Donald Trump laid out plans to ease the US coronavirus lockdown and on reports, later played down, that a drug may potentially help treat COVID-19.

The less active US crude contract for May tumbled by $1.59, or 8 percent, to $18.28, attributable to the imminent expiry of the contract, on April 21, and fast-filling crude storage.“As the oversupply is more a topic for right now, the May contract trades at a deep discount to June,” UBS analyst Giovanni Staunovo said.

Investors pinned their hopes on plans to ease lockdown measures after Trump laid out new guidelines for US states to emerge from a coronavirus shutdown in a staggered, three-stage approach.

“If more of the global economy enacts plans to reopen and restores some sense of normality, that could help oil prices find a firmer floor in May, aided by the OPEC+ supply cuts kicking in,” said Han Tan, market analyst at FXTM.

The Organization of the Petroleum Exporting Countries (OPEC) and producers including Russia, a grouping known as OPEC+, agreed on production cuts of nearly 10 million bpd last weekend after an earlier oil supply pact collapsed.

Oil prices were also boosted by a report of encouraging partial data from trials of US company Gilead Sciences’ experimental drug remdesivir in severe COVID-19 patients, although the company cautioned that full data would need to be analyzed to draw any conclusion.

Both oil benchmarks are still heading for a second consecutive week of losses, with US oil prices at 18-year lows.

China’s daily crude oil throughput in March sank to a 15-month low, with state refiners maintaining deep output cuts, but there are some signs of recovery as the country begins to ease coronavirus containment measures.

The hobbling of China’s economy was also highlighted by data showing that GDP shrank 6.8 precent year on year in the first three months of this year, the first such decline since quarterly records began in 1992.

ConocoPhillips on Thursday said that it will reduce planned North American output by 225,000 bpd, the largest cut so far by a major shale oil producer to deal with the unprecedented drop in demand.

“This highlights that the market will see meaningful cuts from outside the OPEC+ group without the need for mandated cuts,” ING bank said in a note on Friday.

“Instead, market forces will do the job, with the low-price environment forcing producers to cut back.” 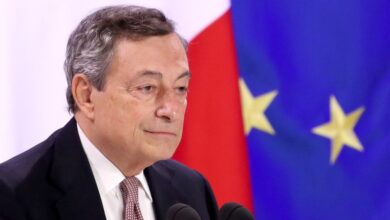