The US State Department said there was “heightened risk” of missile attacks near military bases and energy facilities in Saudi Arabia.

Iran said on Sunday it no longer considers itself bound by the 2015 nuclear deal negotiated with the US and other world powers in the fallout from the killing of Soleimani. It added that it has to “settle a score with the US”.

Meanwhile, the spot gold price rose to its highest in almost seven years as concerns over geopolitical tensions in the Middle East stoked demand for precious metals, which are seen as safer investments during times of financial uncertainty.

Gold “has entered 2020 with strong momentum”, Gavin Wendt, senior resource analyst at MineLife Pty in Sydney, said in an email to Bloomberg. “When you factor in ongoing uncertainty with respect to US-China trade talks and heightened security issues with Iran, gold really is a no-brainer.”

In the wake of the US action, fears over just how far both sides are willing to escalate the situation will likely limit the extent to which haven hedges unwind, Stephen Innes, chief market strategist at AxiTrader Ltd, said in a note on Sunday.

“With the S&P 500 trading near an all-time high and given the markets have been trading with strong positive risk bias, gold is by far the best hedge in this environment and should attract more buying even from those who tend not to fiddle with gold,” Innes said.

The Iraqi government on Sunday called on American and other foreign troops to leave Iraq, heightening concerns of a widening Middle East conflict that may disrupt oil supplies from the region.

Meanwhile, US President Donald Trump on Sunday threatened “major retaliation” against Iran if Tehran were to retaliate for the killing.

“The assassination of Iranian General Qassem Soleimani will trigger a long cycle of regional escalation with significant risks to US assets and Middle East energy infrastructure that nevertheless stop short of war,” Eurasia Group analyst Ayham Kamel said in a note.

“But the risk of limited conflict is real. It would include substantial Iranian attacks on Gulf energy targets and direct naval clashes between the US and Iran.”

Rising tensions between the US and Iran have already caused unprecedented disruptions to oil production in the Middle East, which accounts for nearly half of the world’s oil production.

Last year, Washington blamed Tehran for sabotage attacks on supertankers and a missile and drone attack on Saudi Arabia’s Abqaiq crude-processing plant in September – the largest single supply halt in the industry’s history.

MSCI’s broadest index of Asia-Pacific shares outside Japan was off 0.2 percent while Japan’s Nikkei slid 2.09 percent to a one-month low.

Hong Kong’s Hang Seng Index had also slipped 0.87 percent, although China’s blue chips were up by a marginal 0.02 percent. 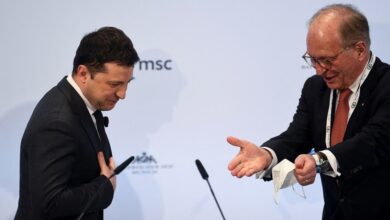