a news station in Monterey, California, aired a story about California’s potential “herd immunity” to the novel coronavirus. The piece opens by discussing a new study from Stanford Medicine in which researchers are conducting blood tests that detect antibodies, which can show whether an individual has or previously had COVID-19. The reporter then goes on to cite Victor Davis Hanson, a Stanford-affiliated source who advances the theory that COVID-19 might have actually begun spreading in California in fall 2019. “[Stanford’s] data could help to prove COVID-19 arrived undetected in California much earlier than previously thought,” KSBW reported.

The piece has spread widely. An accompanying web story posted to the TV station’s website has been shared 58,300 times, and has also been picked up by SF Gate. The theory is appealing to some, particularly those who had respiratory illnesses in late 2019 that they now believe could’ve been COVID. In their minds, that might mean they have some immunity to the virus—and if a large portion of Americans have some immunity, we can begin our move out of lockdown. But that theory has no scientific basis and spreads dangerous misinformation.

Let’s start with the facts. I reached out to Stanford Medicine to try to understand the goals of its antibody test, and how it relates to Hanson’s fall 2019 theory. The short answer on the latter is that it doesn’t. “Our research does not suggest that the virus was here that early,” says Lisa Kim of Stanford’s media relations team.

Neither does anyone else’s, it appears. “There is zero probability [SARS-CoV-2] was circulating in fall 2019,” tweeted Trevor Bedford, a computational biologist at Fred Hutch Cancer Research Center, who has been tracking the SARS-CoV-2’s genetic code as it has spread. Allison Black, a genomic epidemiologist working in Bedford’s lab, says this is apparent from researchers’ data. As the virus spreads, it also mutates, much like the way words change in a game of Telephone. By sequencing the virus’s genome from different individual samples, researchers can track strains of coronavirus back to its origins. They have been continually updating their findings on Nextstrain. (In case you’re wondering, the strains have nothing to do with severity of illness. They’re simply a way to track the virus’s mutations over time.)

Richard Neher, an evolutionary biologist at the University of Basel in Switzerland, told the Scientist that Nextstrain researchers’ work has tracked the virus back to a single source “somewhere between mid-November and early December,” which then spread in China. The earliest cases in the U.S. appeared in January 2020, according to Nextstrain’s sequencing work. Washington state, where the first known COVID-19 case in the U.S. was identified, has at least six strains. A similar analysis of California’s coronavirus cases—which has yet to be peer reviewed—identified at least eight strains in the state, suggesting transmission from Washington state, New York, Europe, and China.

If genomics aren’t your thing, consider this: If the virus had arrived earlier, we would have known. Humans have no natural immunity to this new virus, which is why it’s spreading quickly, infecting millions and killing tens of thousands. That’s evident in what’s going on in New York right now, says Black. “If it had arrived in fall of 2019, and we were all living our lives as normal, we would’ve had New York back in fall of 2019,” she says. There’s no reason why this virus would spread undetected for months before wreaking the havoc it has.

So what’s really behind this theory? It might be worth considering the source. KSBW’s piece begins by mentioning Stanford Medicine’s research, then quotes Victor Davis Hanson, a Stanford-affiliated source; the piece reads as if Hanson is one of these aforementioned Stanford Medicine researchers. But Hanson is a military historian, not a doctor or scientist; he is affiliated with Stanford’s Hoover Institute, a conservative think tank. (I reached out to Hanson for comment, but he has not responded; we will update this article if he does.) The piece makes no effort to clarify what the Hoover Institute is, and delves into Hanson’s “theory” as a prelude to a brief explanation of Stanford Medicine’s study. Hanson’s recent work, published in the National Review, suggests he is eager to reopen the American economy. It would be quite convenient, then, to claim that the virus has already torn through the U.S. and granted us immunity. (In that article, Hanson also claims that “much of the virus modeling is nearly worthless” and refers to it as “science,” in scare quotes.)

Hanson also (incorrectly) suggests that the virus’s spread in California came from “Chinese nationals” visiting California. Looking more closely at his recent work reveals a potential political motive for that claim; in a recent op-ed for Fox News, he argues that we already have too many Chinese nationals visiting, studying, or collaborating in the U.S., and that post-coronavirus America should “wake up” and make changes.

While it’s certainly possible that some cases of transmission came from Chinese nationals, current genomic analyses show that there are several cases of Americans who traveled to China and brought it back with them. Limiting Chinese nationals’ access to the U.S. wouldn’t have prevented those transmissions, or the cases which entered the U.S. via other countries, like Italy. What’s more, the data show that community spread and coast-to-coast transmission within the U.S. are responsible for much of the spread. The trope of the Chinese as disease harbingers has been used to justify anti-Chinese travel bans and dehumanization for centuries, and the coronavirus lends a new opportunity to revive those arguments.

While Hanson may have advanced this unscientific claim, he didn’t do it alone. Thousands of people have shared the article and casually questioned whether the illness they had last fall or winter might have actually been coronavirus. (Black says her friends, too, have brought up this theory around her, and she shuts it down quickly: “I’ll say, ‘Were you in China in December?’ Otherwise, absolutely not.”) The idea that we might have unknowingly been infected months ago and now have immunity is comforting, and when we see an article that might confirm that hope, we share it.

Confirmation bias has driven sharing other dubious science as well, though sometimes it works to reinforce fear rather than offer hope. A Medium piece asserting that people exercising outdoors could be spreading coronavirus went viral Wednesday, shared by many who were already paranoid about being outside near runners or cyclists. Vice dug into its origins, and it turns out to be written by an entrepreneur and is based on very flimsy research. With the news changing rapidly, it’s difficult to keep track of what’s legitimate, but when in doubt, look at who’s making sweeping claims and ask how they know (or don’t know) what they claim.

‘I want to dance’: All COVID curbs lifted in England

Doctor’s Note: What are serology tests and do they work?

Should You Be Eating Chia Seeds? Here’s What Nutritionists Say

What’s The Relation Between Smartphones and Pain? 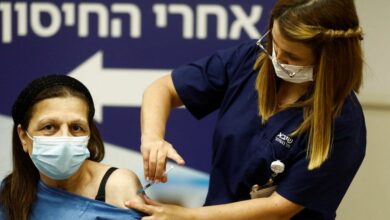 Mompreneur: How Do You Enjoy Lebanese Delicacies in The UAE?