Pamplona has cancelled its famous San Fermin festival, which draws thrill-seekers from all over the world to run with stampeding bulls through the Spanish city’s streets. 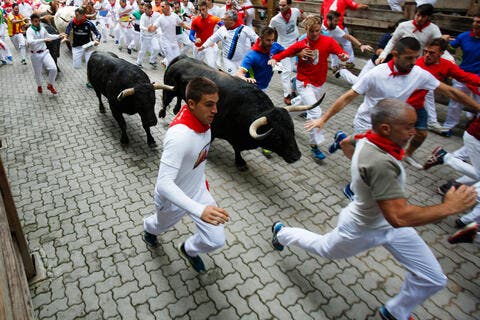 The mayor announced on Monday that the festival would be cancelled for a second year running due to the ongoing coronavirus pandemic.

‘It is with regret that I’m forced to officially suspend the festival of San Fermin in 2021,’ mayor Enrique Maya told reporters on Monday.

He cited the high Covid-19 infection rate in the Navarra region and the low vaccination ratio.

In previous years, the nine-day festival has drawn as many as one million people to Pamplona.

Regional president Maria Chivite had indicated in February that the festival would not be going ahead this year, but at the time Maya had refused to call it off and insisted he had the final say.

On Monday, he said the city council will use the cash due to be spent on the July festival to pay for activities throughout the summer.

As well as the morning bull runs and afternoon bullfights, the event features round-the-clock singing, dancing and drinking by revellers dressed in white clothes and red neckerchiefs. There are also religious events in honour of the saint.

Last year’s cancellation was the first in more than four decades and was a big financial blow to Pamplona’s bars, restaurants and hotels.

The last time the city went two years in a row without celebrating the festival was during Spain’s 1936-39 civil war.

One of the worst-hit countries in Europe when the pandemic began last spring, Spain has managed to maintain a relatively low infection and death rate since a second spike in early 2021.

On Friday, 5,461 new infections were recorded country wide and 15 deaths. At least 3.49million people in Spain have been infected with coronavirus since the pandemic began, with 77,738 deaths being reported. BlaBla is a way to speak in other languages Friday the 13th proves lucky for $1.35 bln lottery ticket holder in US