Israel’s attack on Gaza on Friday was weeks in the making, a deliberate act to gain legitimacy with its public, say Palestinian observers, as Israel braces for new elections in November.

On Friday, Israel launched missiles throughout the besieged Palestinian enclave, killing 10 people, including a five-year-old girl, a 23-year-old woman, as well as Taysir al-Jabari, a commander of Islamic Jihad’s military wing.

Islamic Jihad group said it fired more than 100 rockets into Israel in retaliation for the air raids. The violence raised fears of another war on Gaza by Israel, just 15 months after a month-long conflict that killed more than 260 people.

“Everyone is nervous, there is no appetite for war,” said Tamer Qarmout from the Doha Institute of Graduate Studies, who hails from Gaza and has family there.

“Gaza has witnessed four or five major conflicts over the last 15 years. We’re still talking about the reconstruction of the Gaza Strip. Gaza has never really recovered, it just lives from conflict to conflict,” he told Al Jazeera.

Israel’s deadly attacks came after Israeli forces arrested Bassam al-Saadi, a senior member of the armed group, earlier in the week. Al-Saadi was detained during an Israeli raid in the West Bank city of Jenin, during which a teenager was killed.

Prior to the assassination of al-Jabari, Israel tightened its grip on the coastal enclave, already 15 years under a brutal blockade, by shutting down all border crossings.

Israel also closed roads around Gaza earlier this week and sent reinforcements to the border as it braced for a response after al-Saadi’s arrest.

Friday’s attack came on the heels of previous assaults, including drone strikes on the Gaza Strip, leading some observers to suggest the current escalation is a calculated move. The West Bank, too, has also seen a rise in Israeli attacks by soldiers and settlers alike, as well as arrests of Palestinians and home demolitions.

“Israel is arming its settlers in the West Bank to shoot and kill Palestinians and not to [do so] under the chain of command of the military. So what we’re seeing right now is an intensification of Israel’s military strategy of ‘shock and awe’,” said Mariam Barghouti, a Ramallah-based researcher. 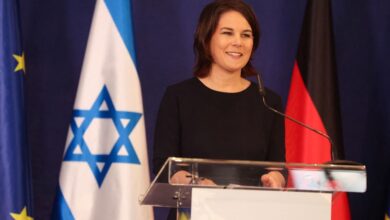