Gunfire rang out in the affluent Ikoyi neighbourhood of Nigeria’s commercial capital Lagos on Thursday with witnesses saying assailants attacked a detention facility in the area that is home to government offices.

Smoke was also seen rising from the direction of Ikoyi correctional facility, and trucks carrying police were seen heading towards the prison. The wreckage of a dozen cars smouldered in the upscale Ikoyi neighbourhood and two official buildings were ablaze.

“The Ikoyi prison is mainly surrounded by government buildings and security establishments. Residents said they saw hoodlums armed with clubs and then gunfire was heard and the fires and smoke were later seen,” said Al Jazeera’s Ahmed Idris, reporting from the capital Abuja.

Other accounts suggested the gunfire resulted from an attempted jailbreak by prisoners. It was unclear if any inmates escaped.

Soldiers patrolled the streets of the city on Thursday a day after several buildings – including police stations, a TV channel and the port – were torched.

The city of 20 million is under a round-the-clock curfew imposed after nearly two weeks of protests against police brutality – the West African nation’s biggest wave of unrest since the end of military rule in 1999. 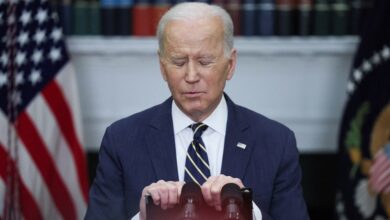