Nigerian security forces are struggling to contain increasing cases of looting on government-run warehouses across the country, in the latest incident of unrest following widespread, youth-led protests against police brutality.

The storage facilities hold tonnes of relief materials including food meant for distribution during lockdowns previously enforced to stem the spread of the novel coronavirus.

While the distribution programme had been temporarily halted across several states in the country in recent months, it emerged this week relief items were still stored in some of these facilities, as well as the private homes of politicians.

The news angered many in the country with the biggest number of people living in extreme poverty globally.

“The food items belong to Nigerians. Why are they hiding them? This is wickedness. How do you hide food from hungry people?” asked Ibironke Babalola, a resident of Nigeria’s commercial capital, Lagos.

Tens of thousands of peaceful protesters have taken to the streets across Nigeria this month to demand an end to police violence and other sweeping reforms.

Amid rising tensions, criminals this week vandalised public buildings and damaged property while others took advantage of the unrest to attack the warehouses holding food items and other supplies.

On Saturday, police officers in the capital, Abuja, shot sporadically into the air and used tear gas to disperse residents who had approached a warehouse.

It was a different scenario in the southern city of Calabar where security forces were unable to stop the ransacking of homes of local politicians, where the attackers suspected some of the COVID-19 relief materials were being kept.

In Ilorin, in central Kwara state, security officers faced difficulties in containing attacks on a government facility in recent days. The state governor has declared a 24-hour curfew to prevent further escalation of violence.

Authorities in Adamawa state, in the country’s northeast, also imposed a round-the-clock curfew on Sunday after looters attacked a large food warehouse.

Home to more than 200 million people, Nigeria is Africa’s most populous country and the continent’s top oil exporter.

But according to the National Bureau of Statistics, almost 83 million people, or 40 percent of the population, live below its poverty line of 137,430 naira ($381.75) a year, with millions depending on daily income for survival.

Some states which have previously suspended handing out coronavirus relief materials had pledged to resume distribution of the food items to poor residents – but some were unconvinced.

“Some of the food items people found in the warehouses had gone bad,” the 35-year-old told Al Jazeera. “It shows you how wicked our people are. What would it cost them to share these rice and other items amongst the poor? People are hungry and they need to eat,” he added.

“The government should ensure that the warehouses still having food in them should be opened and the food distributed to avoid further clashes between security forces and poor Nigerians looking for food.” 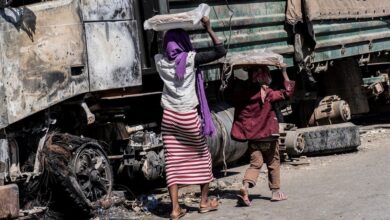