The Dyke March – which celebrates lesbian pride – began at Bryant Park and finished at Washington Square Park, where couples splashed around in the fountain and embraced.

Going topless used to be illegal in New York, before a 1992 Court of Appeals ruling on the state law reversed the ban as long as nudity was not being used for commercial purposes.

For some campaigners showing breasts in public is a form of protest to assert the right of women to dress as they wish.

The main Pride parade Sunday is being touted as a virtual event, with a smaller scale march across three blocks. Organizers predict ‘millions’ will watch on TV.

Later at Washington Square Park, large groups of party goers who had congregated at the park were dancing and playing music well beyond Saturday night and into Sunday morning, breaking a midnight curfew.

While the curfew was still technically in place, the NYPD won’t start cracking down on revelers breaching the order until after Pride weekend ends on Monday, a source in the department confirmed to DailyMail.com Sunday.

The event, which usually draws throngs of participants and spectators, is once again being presented as a television broadcast special, since now-lifted pandemic restrictions were still in effect at the time it was being planned.

But people were still able to gather in person on Sunday afternoon for PrideFest, a street fair with vendors, food and entertainment in Manhattan.

A dance party is taking place in Herald Square and fireworks, music and food are located at Pier 45 in Hudson River Park.

The controversial ban is scheduled to be in place from next year through 2025, organizers said.

For some, cops shouldn’t have a uniformed presence at a march commemorating the 1969 Stonewall uprising, sparked by a police raid on a gay bar. Tensions between law enforcement and some parts of the LGBTQ community still exist, a half century later.

‘Folks still have challenging and traumatic and many times horrific relationships with law enforcement,’ said John Blasco, a parade regular.

‘If you´re an officer … of course you should be able to celebrate and express your pride, but you don´t need to do it in a uniform that has perpetuated violence against many of the people who are trying to celebrate their pride that day.’

For others, presence of LGBTQ police marchers is an expression of hard-fought diversity and inclusion that should be celebrated, a hallmark of how integral LGBTQ people are in the fabric of American life. 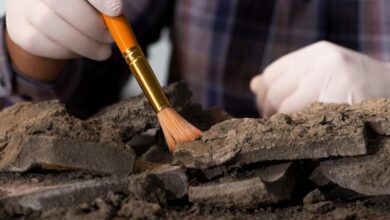 Halal Travel! What is it Exactly? How Did These Fitness YouTubers Break World Record?

Around 1500 Muslims in Italy Will Cancel Hajj This Year

In Style: Can Jill Biden Wear What She Wants?