Egyptian actress Nelly Karim has confirmed that she got engaged to Egyptian actor Hisham Ashour, a former squash player, and the brother of squash champion Ramy Ashour.

Karim said in a statement to Youm7 newspaper that she will wed Hisham Ashour during this month.

The Egyptian star has celebrated her engagement to Hisham Ashour in a small celebration attended by family and close friends.

Nelly Karim and Hisham Ashour have frequently appeared together in the North Coast in the previous period, and they attended special occasions of their friends together.

Hisham Ashour is an international squash player. He had been ranked among the top ten in the world. After retirement, he moved to the States and established a squash academy, but due to the pandemic, he was forced to return to Egypt.

But the pandemic didn’t stop Hisham, as he and his brother Ramy Ashour have established several academies to teach squash in Egypt.

Egyptian actress Nelly Karim has been married twice: the first marriage was at the age of 16, and she gave birth to her two sons Karim and Youssef, then she married nutritionist Hani Abu Al-Naga, whom she separated in 2015, and she has Celia and Kinda with him.

As for Hisham Ashour, proposing to Nelly Karim is the first official relationship he ever had in his life. 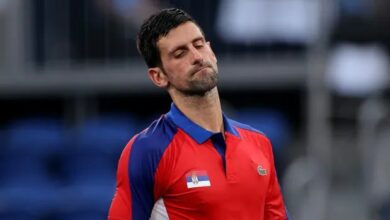 Will he stay or will he go? Tennis champ Djokovic’s hearing looms large