Mars used to be a blue planet and this is why space explorers have long been hoping to find signs of past Martian life, Nasa’s chief scientist said at a recent marathon virtual conference hosted by the Sharjah Research Technology and Innovation Park (SRTI Park).

Dr James Green, chief scientist at National Aeronautics and Space Administration (Nasa) headquarters, said finding life on Mars would be revolutionary and would start a whole new line of thinking.

“It was a blue planet and may now be down to 13 per cent of the amount of water it used to have. It is a wonderful resource to explore the planet,” he said during the SRTI Park’s inaugural Mena Innovation Technology Transfer Summit (MITT Summit).

Earlier, at a different forum, Green said one promising indication of life on Mars is that every summer, the planet gets gassy, with the amount of methane gas present at the surface increasing dramatically. The Curiosity Rover on Mars also detected molecular oxygen, which increases each spring and summer by up to 30 per cent before dropping again in the fall. “That tells us life may be underground during the summer – the soils heat and therefore loosen up such that the methane can leak out. We have all kinds of circumstantial observations that perhaps Mars has microbial life, too,” he explained.

More details on the Red Planet’s weather shall be captured by the UAE’s Hope probe, when it reaches Martian orbit early next year, in time for the country’s golden jubilee.

Hope probe, the first interplanetary mission of the Arab world, will be the first to create a holistic picture of Mars’ atmosphere. It will investigate how the lower and upper levels of the planet’s atmosphere are connected and generate significant details on how it varies in the entire Martian year.

Green noted Mars had water millions or billions of years ago, and at present, water could be found in underground aquifers and frozen glaciers. Life on Mars could’ve started there, he said, adding that Nasa is also hoping to find potential evidence of past life on Mars when it lands on the planet in February 2021.

Humans going back to the moon

The first flight, Artemis I, is scheduled for launch on November 2021 but it will be unmanned. This will be followed by Artemis II in 2023 with astronauts on board but will not land on the Moon. The following year, the first woman and the next man will be sent to the South Pole of the moon.

Terrier said: “Any future exploration will be an international collaborative effort – like the ISS (International Space Station), where astronauts are deployed in space for a long period. Our next step is to go back to moon with Artemis programme in 2024 for a longer and sustainable stay on the Moon.”

Omran Sharaf, project manager of Emirates Mars Mission (EMM) – who was also present at the MIIT Summit – said space exploration, such as Hope’s journey to the Red Planet, goes beyond making groundbreaking discoveries. It is about inspiring the youth, said Sharaf, who is one of the first engineers to join the Mohammed Bin Rashid Space Centre.

He added that Hope, which blasted off into space in July this year, is the realisation of the UAE’s vision of the future.

The online MIIT Summit connected Sharjah, Paris, Rio de Janeiro, New York and major players in the world of technology. It brought together global investors, government and private sector representatives, experts, entrepreneurs, academics, and other relevant stakeholders for 14 hours of discussions on how to best shape the future of innovation and promote sustainability.

Hussain Al Mahmoudi, CEO of SRTI Park, said: “MITT Summit is in line with ‘the vision that anticipates the future’ being advocated by His Highness Sheikh Dr Sultan bin Muhammad Al Qasimi, Member of the UAE Supreme Council and Ruler of Sharjah. The Middle East is becoming the world’s fastest-growing marketplace for business and technology transformation.” 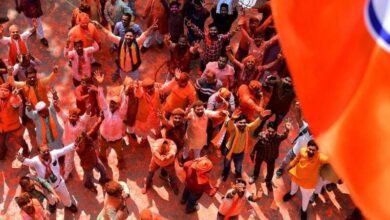 In Pictures: Colors Fly as India Elections Get Underway

Boyfriend Sells His Girl to a Sex Trafficking Ring