NASA has confirmed the details of the four civilian astronauts that will spend a week living and carrying out experiments on the International Space Station in April.

Axiom Space, the private space company developing its own module for the ISS, will operate the trip, sending the four to the station on a SpaceX Crew Dragon capsule.

NASA astronaut and Axiom Space VP Michael López-Alegría will act as mission commander, alongside Larry Connor as pilot, with Mark Pathy, and Eytan Stibbe working as mission specialists during the day-long trip to the station.

Once onboard the crew, who each spent $55 million for the trip, will spend eight days carrying out a range of experiments, commercial activities and running educational sessions for children on the Earth below.

It is an international crew, with López-Alegría born in Spain but raised in California, Connor from the US, Pathy from Canada and Stibbe born in Israel.

They will launch on Wednesday, March 30, from Launch Complex 39A at NASA’s Kennedy Space Center in Florida, on a flight-proven SpaceX Falcon 9 rocket.

The mission has been named AX-1, and the crew have been training at the NASA Johnson Space Center in Houston, and other NASA facilities, since August 2021.

This training has allowed them to become familiar with the ISS systems, scientific facilities on board and emergency procedures.

As well as training with NASA, the four have been working with the European Space Agency (ESA) and SpaceX at its Hawthorne, California facility.

The SpaceX training has allowed them to become familiar with the operation of the Crew Dragon capsule, that will take them to the station and back.

NASA started working with the Axiom mission operations team on simulations in December, to get a feel for how the first all civilian crew on the ISS would operate.

This work allowed ground control for NASA and Axiom to familiarize themselves ‘with the dynamic phases of the private astronauts’ flight to and from the space station.’

The U.S. space agency confirmed that they’d continue these joint simulations through the next few months, in preparation for launch on March 30.

‘This represents another significant milestone in our efforts to create a low-Earth orbit economy,’ said Phil McAlister, director of commercial spaceflight at NASA.

‘I wish these Axiom crew members safe travels, and I hope they find their time in space productive and enjoyable.’

It isn’t clear exactly what the objectives of the four AX-1 crew will be, as the final proposals won’t be approved until closer to flight, NASA confirmed.

Axiom previously revealed a microgravity research portfolio the Ax-1 crew intends to undertake in orbit, in partnership with a variety of organizations on Earth.

‘The goal for the Ax-1 crew is to set a standard for all future private astronaut missions in terms of our preparation and professionalism,’ López-Alegría said.

‘As the commander, I am proud of the work these crew members have put in to be ready to conduct meaningful work on the International Space Station and glad to see them meet the standards required of all astronauts flying to station since Expedition 1.

‘Ax-1 is focused on a huge amount of science and outreach activities, and we look forward now to finalizing that flight program.’

Expedition 1 was the first launch of astronauts, from Russia and the US to the space station on November 2, 2000. The ISS has been continuously occupied since then.

Axiom has also revealed that the astronauts will be taking technology built by Israeli company, Aleph Farms, to the station.

This technology involves turning cells taken from a cow into raw meat by growing the cells and turning them into muscle, fat and other components.

‘Aleph’s general goal is to be able to provide nutritious, tasty, sustainable food anywhere, anytime,’ said Zvika Tamari, the head of space research, adding that ‘ stretching that to its limit is the ability to also provide nutrition in space.’

In terms of outreach, an ancient coin minted by Jewish rebels revolting against the Romans 1,900 years ago will accompany former Israeli pilot Etan Stibbe to the ISS.

Stibbe, 63, is one of three men who paid $55 million each to launch aboard a SpaceX Falcon 9 rocket for Axiom’s first privately crewed mission.

The coin comes from the Bar Kokhba revolt, which took place from 132 to 136 AD and was the final of three Jewish-Roman wars that first began when Romans took control of Jerusalem in 63 AD.

It bears etchings of a palm tree on one side and a vine leaf with the inscription ‘Year Two of the liberty of Israel’ on the other.’

NASA recently announced the ISS had just nine years of operational life left, with plans to sink it in the South Pacific Ocean in January 2031.

On the run up to that happening, the space agency plans to support commercial operators in launching privately funded and run space stations, starting with an Axiom Space module attached to the ISS.

This launch is a precursor to that module, which is expected to dock with the station by the middle of this decade, part of NASA’s efforts to built a robust low-Earth orbit economy – driven by the private sector, rather than national players.

Axiom recently completed the preliminary design review of two modules that will be attached to the ISS this decade, then separate into its own free-flying station.

For more than 21 years, NASA has supported a continuous U.S. human presence in low-Earth orbit aboard the space station.

‘The agency’s goal is to enable a strong, commercial marketplace in low-Earth orbit with private industry where NASA is one of many customers,’ a spokesperson said.

‘This strategy will provide services the government needs at a lower cost, enabling the agency to focus on its Artemis missions to the Moon in preparation for Mars while continuing to use low-Earth orbit as a training and proving ground for those deep space missions.’ 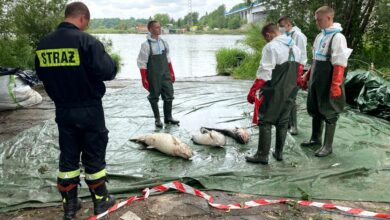