Myanmar’s coup leaders lost a tug of war over the leadership of its United Nations mission in New York, as well as the Myanmar embassy in Washington, as organised resistance against the coup grew at home on Friday with dozens of townships in the largest city of Yangon forming their own self-governing bodies in defiance of the military.

Anti-coup protesters returned to the streets amid threats of violence, to continue their demand for the generals to step down and restore power to the elected government of Aung San Suu Kyi.

In the country’s second largest city of Mandalay, there were local media reports that one person had been shot and killed.

Earlier, a big crowd marched peacefully through the city chanting: “The stone age is over, we’re not scared because you threaten us.”

In Yangon’s Thaketa Township, protesters were also regrouping on Friday afternoon, after reportedly being hit with stun grenades in the morning, according to The Irrawaddy news website.

In the city’s Sanchaung Township, demonstrators were also seen setting up barricades and hanging pictures of those killed since the protests began.

There were also reports of power cuts across the country.

On Friday, the civil disobedience movement also announced that at least 34 of the 45 townships in the city had formed so-called “people’s governing bodies” following the direction of those who were elected to parliament but prevented from taking their seats after the generals seized power.

Protesters also took to the streets in smaller numbers in the capital, Naypyidaw, according to Mizzima News.

On Thursday, police broke up rallies with tear gas and gunfire in several cities but their crackdown was more restrained than on the previous day, when the United Nations said 38 people were killed in the bloodiest day of protest so far.

On the diplomatic front, the United States has unveiled new sanctions targeting military conglomerates after the deaths of dozens of civilians protesting against last month’s coup.

Bachelet said more than 1,700 people had been arrested, including 29 journalists.

Singapore has been the most outspoken of Myanmar’s neighbours and its foreign minister, Vivian Balakrishnan, told the city-state’s parliament on Friday that it was a “national shame” for armed forces to use weapons against their people.

He called on Myanmar’s military to seek a peaceful solution but acknowledged external pressure would have only a limited effect on the situation.

A spokesman for the ruling military council did not answer telephone calls seeking comment.

A clash over who represents Myanmar at the United Nations in New York was averted – for now – after the military government’s replacement quit and the Myanmar UN mission confirmed that Ambassador Kyaw Moe Tun remained in the job.

The military fired Kyaw Moe Tun on Saturday after he urged countries at the UN General Assembly to use “any means necessary” to reverse the coup.In Washington, it was unclear whether Myanmar’s embassy was still representing the military government, after it issued a statement condemning the deaths of civilian protesters and called on authorities to “fully exercise utmost restraint”.

One diplomat in the embassy also resigned and at least three others said in posts on social media they were joining the civil disobedience movement of strikes against the coup.

The UN human rights investigator on Myanmar, Thomas Andrews, urged the Security Council – which meets to discuss the situation on Friday – to impose a global arms embargo and targeted economic sanctions on the coup leaders.

YouTube has removed five channels of Myanmar’s military-run television networks hosted on its platform in the wake of the coup.

“We have terminated a number of channels and removed several videos from YouTube in accordance with our community guidelines and applicable laws,” a YouTube spokeswoman said in a statement in response to a Reuters question.

The channels taken down include the state network, MRTV, (Myanma Radio and Television) as well as the military-owned Myawaddy Media, MWD Variety and MWD Myanmar, YouTube said.

Other social media platforms are also grappling with how to moderate military content and a proliferation of hate speech and misinformation in Myanmar.

Reuters reported on Thursday that Myanmar soldiers and police were using TikTok to deliver death threats to protesters.

Americans should prepare for spread of coronavirus: Health officials

WTO on the Qatar-Saudi Arabia case: Kingdom’s measures are within its rights 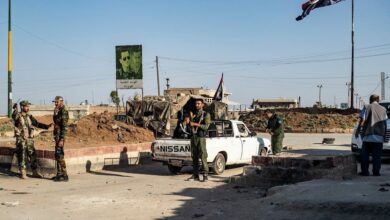