Rescue workers in Morocco moved closer on Saturday to reaching a young child trapped at the bottom of a well for five days in a delicate operation threatened by landslides.

The five-year-old boy, Rayan Awram, fell into the well in the northern hill town of Bab Berred on Tuesday and his plight has gripped the North African country.

Heavy machinery has been used non-stop with excavations turning the landscape into a construction site of red earth in the forested countryside.

“We have two metres more to dig to reach Rayan and we hope we will not encounter rocks,” lead rescuer Thamrani Abdelhadi told reporters at the site on Saturday afternoon.

He said it was difficult to determine the child’s health condition because a camera dropped down the well shows him lying on his side. But he added, “we hope we will rescue him alive”.

State television later reported rescuers were 90cm (35 inches) from Rayan, and they pinpointed his location from the access tunnel they dug from a trench cut into the hillside.

“We’re almost there,” said one of the operation’s leaders, Abdesalam Makoudi, adding “tiredness is kicking in, but the whole rescue team is hanging on”.

The more time that passes, however, the more fears rise about the boy’s condition.

The well is 32m deep and narrows as it descends from its 45cm (18-inch) diameter at the top, which means the rescuers cannot go down themselves to retrieve the child.

Workers in helmets and high-visibility vests carried stretchers, ropes, tackle and other equipment down into the trench they dug parallel to the well.

The hilly region around Bab Berred is bitterly cold in winter and though food and water was lowered to Rayan. He was also supplied with water and oxygen using a tube.

A helicopter is standing by to ferry Rayan to hospital as soon as he is freed.

Thousands of people have gathered and even camped in solidarity around the site in recent days.

“We are showing solidarity with this child who is dear to Morocco and the whole world,” said onlooker Hafid el-Azzouz. “We hope that, with God’s will, he will get out.”

The incident has sparked an outpouring of sympathy online on social media, with the Arabic hashtag #SaveRayan going viral across North Africa.

Moroccan footballer Achraf Hakimi mentioned the rescue efforts on social media, alongside emojis of a broken heart and hands together in prayer.

Algerian footballer Riyad Mahrez also joined the chorus of solidarity, sharing a picture of Rayan on Facebook alongside the hashtag “Stay Strong”.

The boy’s fate has also attracted crowds of people to the site of the operation, and authorities have called on the public to “let the rescuers do their job and save this child”. 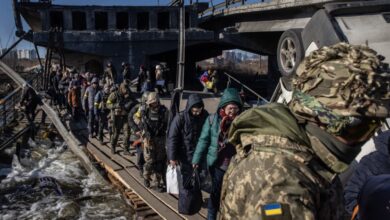