In the first 10 years of Syria’s conflict more than 300,000 civilians were killed, the United Nations has said, while on the same day another report by the world body said more than 100 detainees have been killed in a Syrian camp.

The civilian deaths report published on Tuesday by the UN Human Rights Office followed what the organisation said were rigorous assessment and statistical analysis of the available data on civilian casualties.

“The conflict-related casualty figures in this report are not simply a set of abstract numbers, but represent individual human beings,” said Michelle Bachelet, UN High Commissioner for Human Rights.

“The impact of the killing of each of these 306,887 civilians would have had a profound, reverberating impact on the family and community to which they belonged,” Bachelet said.

The figures released by the UN do not include soldiers and fighters killed in the conflict; their numbers are believed to be in the tens of thousands. The numbers also do not include people who were killed and buried by their families without notifying authorities.

The Syrian conflict began with anti-government protests that broke out in March 2011 in different parts of Syria, demanding democratic reforms following the Arab Spring protests in Egypt, Tunisia, Yemen, Libya and Bahrain that removed some national leaders who had been in power for decades.

The protests quickly turned into a full-blown civil war that killed hundreds of thousands and destroyed large parts of the country. Russia refocusing on Donbas but no offensive yet: Pentagon 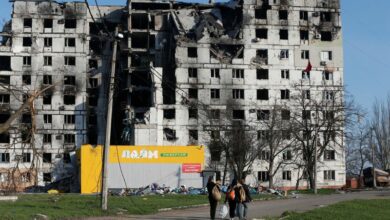