Police have killed more protesters in Kazakhstan as unrest continues, while President Kassym-Jomart Tokayev has attempted to present the unprecedented crisis as improving.

After almost a week of demonstrations and riots, he said on Friday that order has been restored in most parts of the vast Central Asian nation.

“Law enforcement forces are working hard. The constitutional order has been mainly restored in all regions,” he said in a statement, adding that security operations would continue “until the total destruction of the militants”.

The interior ministry said 26 “armed criminals” had been “liquidated” and more than 3,000 detained, while 18 police and national guard service members had been killed since the start of the protests.

As the worst violence since 30 years of independence showed no sign of abating, fresh gunshots could be heard on Friday morning near the central square in the largest city, Almaty, where troops and protesters had battled through much of the previous day.

Protests, which are rare in the tightly controlled, relatively stable former Soviet nation, began at the weekend as anger grew over rising fuel prices.

But the rallies have since morphed into violent anti-government riots.

At the request of Tokayev, Russia has sent “peacekeeping forces”. They arrived on Thursday, amid warnings from the West to Moscow to respect Kazakhstan’s sovereignty.

Tokayev is expected to address the nation later on Friday.

Tokayev has said in a statement that the “forces of law and order are working hard” in response to the unrest and claims that “constitutional order has largely been restored in all regions of the country”.

“An anti-terrorist operation has been launched,” he said. “Local authorities are in control of the situation. But terrorists are still using weapons and damaging the property of citizens. Therefore, counter-terrorist actions should be continued until the militants are completely eliminated.”

Kazakhstan’s interior ministry says 26 “armed criminals” have been “liquidated” and more than 3,000 detained since the protests started.

The department said in a statement that 18 police and national guard service members had also been killed amid the unrest.

The internet has been shut off in the tightly controlled former Soviet republic since Wednesday, making it difficult to determine the full extent of the violence there. 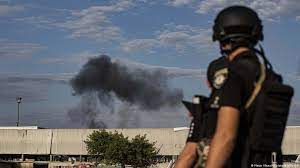 Saudi Arabia’s Riyadh will be one of largest city economies: Crown Prince