It was reported that the reason behind Taylor blocking Henedy is the uncanny resemblance between her and the female character Mohamed played under the name ‘Effat Al-Sherbiny‘ in Gaana Al-Bayan Al-Tali (We Received The Following Statement) movie premiered 20 years ago co-starring next to retired actress Hanan Turk.

On Instagram, Henedy responded to the block in his usual sarcasm.

He shared a collage picture of the fictional character Effat Al-Sherbiny next to Taylor Steingold and joked:

‘Far from the resemblance, but why when I accessed this profile to know who she is, I found out that she had blocked me?’

Henedy added: ‘Chemistry is so treacherous.’

Fans of the star were not the only ones who interacted with the post, as many Arab a-listers took part in defending Henedy by joking with him too.

For instance, Syrian actress Shoukran Mortaja joked: ‘Is there any one more beautiful than you?’

As for Tunisian singer Latifa, she told Henedy: ‘You are more beautiful’ adding few laughing emojis.

A 28-Year-Old Video of Haifa Wehbe Resurfaces.. Can You Tell It’s Her? 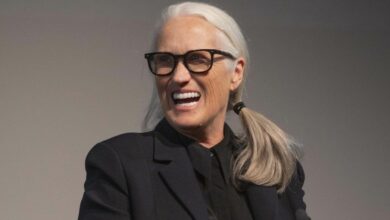 Jane Campion: Power of the Dog director thrilled with her Hollywood comeback