Baby Yoda has been gone from our lives for far too long (since the season finale of The Mandalorian on December 27). Now The Mandalorian creator Jon Favreau is here with your dose and what a dose it is: It’s Baby Yoda aka The Child with the man behind Star Wars, George Lucas.

There’s no context, just George Lucas holding Baby Yoda. It’s cute. It’s adorable. It’s heartwarming, especially when you think about how Lucas is basically this cute little puppet’s granddaddy. Soak it in. Get your Baby Yoda dose. Let Baby Yoda wash away all that is stressing you out. Find hope in this photo. Find joy in this photo.

The Mandalorian wrapped up its eight-episode season with Mando (Pedro Pascal) successfully rescuing Baby Yoda/The Child and committing to trying to find out more about him (her?) and where he came from, or raise him as his own.

After the season ended, Favreau teased season two is coming fall 2020 and will introduce new characters, including the species Gamorrean who fans know as one of the guards from Jabba the Hutt’s palace. Please note The Mandalorian takes place after Return of the Jedi. 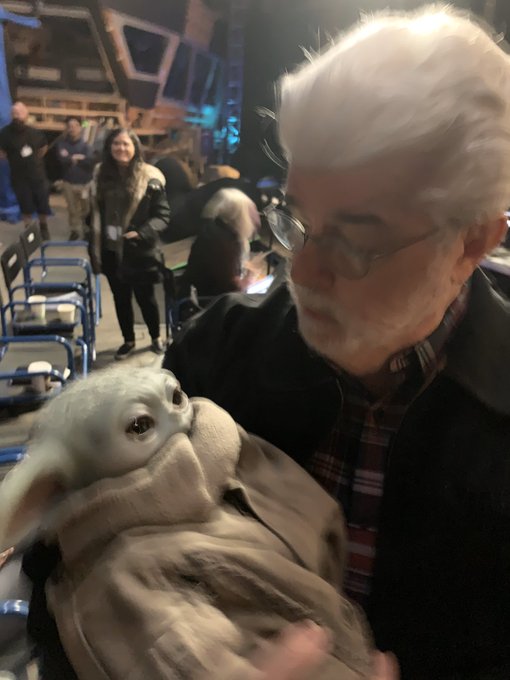 At the end of season one, Giancarlo Esposito‘s Moff Gideon survived his TIE fighter crash. You know he’s not going to give up on getting Baby Yoda into his clutches.

According to Deadline, season two will likely include characters from the Skywalker saga of Star Wars. Who? Who knows!

Baby Yoda Breaks the Internet
We’ll learn more about The Child, naturally. Those involved in the show, including director and actor Taika Waititi, know more about the character than they’ve spilled.

“I knew that people would be talking about Baby Yoda, but I also know Baby Yoda’s real name,” Waititi told EW. “So, if you’re gonna do me a favor, please stop calling him Baby Yoda. Or is it a her! No one knows!”

The Mandalorian season one is now streaming on Disney+.

Son of Babylon: Mosul Through The Eyes of an Iraqi Filmmaker