Miley Cyrus sent love to her alter-ego Hannah Montana on Wednesday, celebrating the role-of-a-lifetime 15-years after she was introduced to the world via Disney Channel in 2006.

Reflecting on their journey together, the Midnight Sky songstress told Hannah: ‘Although you are considered to be an “alter ego” in reality there was a time in my life when you held more of my identity in your glovette than I did in my bare hands.’

Cyrus had a lot to say to Montana, the role which rocketed her to superstardom at just 13.

‘Hi Hannah, It’s been a while. 15 years to be exact,’ she began, before giving a sort of origin story. ‘Since the first time I slid those blonde bangs over my forehead in the best attempt to conceal my identity and then slipped into a puke pink terry cloth robe with a bedazzled HM over the [heart].

‘I didn’t know then…that is where you would live forever,’ she wrote.

‘Not just in mine but millions of people around the world,’ Miley continued. ‘Although you are considered to be an “alter ego’ in reality there was a time in my life when you held more of my identity in your glovette than I did in my bare hands.’

Talking about the irony of her rise, the Malibu singer said: ‘We had an equal exchange in which you provided me with a superlative amount of fame in return to the anonymity I could gift to you. But, a lot has changed since then.

‘You were a rocket that flew me to the moon and never brought me back down,’ she went on, remembering when she was ‘taping myself singing I Love Rock n’ Roll against a white wall in my mom’s friend’s kitchen on the front of a first draft script would make my wildest dreams a reality.’

‘You and I have been through it all, my friend,’ Miley went on, ‘We’ve shared many firsts. A lot of lasts. Ups. Downs. Tears + laughs.’ 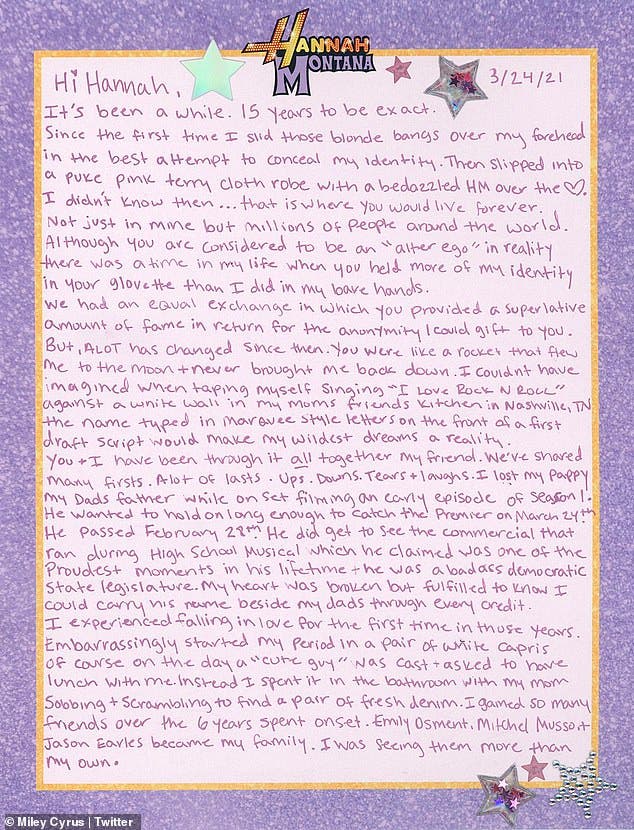 Miley was on the show through some trying times, like when she lost her pappy before the premiere of the series, which also starred dad Billy Ray Cyrus.

‘My heart was broken but fulfilled to know I could carry his name beside my dads through every credit,’ she told fans.

She also shared happy moments with Hannah, like falling in love and other more awkward events like when she was surprised with her first period while wearing white capri pants.

Along with the experiences, Cyrus said she gained amazing friends like co-stars Emily Osment, Mitchel Musso and Jason Earles, who she said ‘became my family.’

‘Breathing life into you for 6 years was an honor,’ Miley continued. 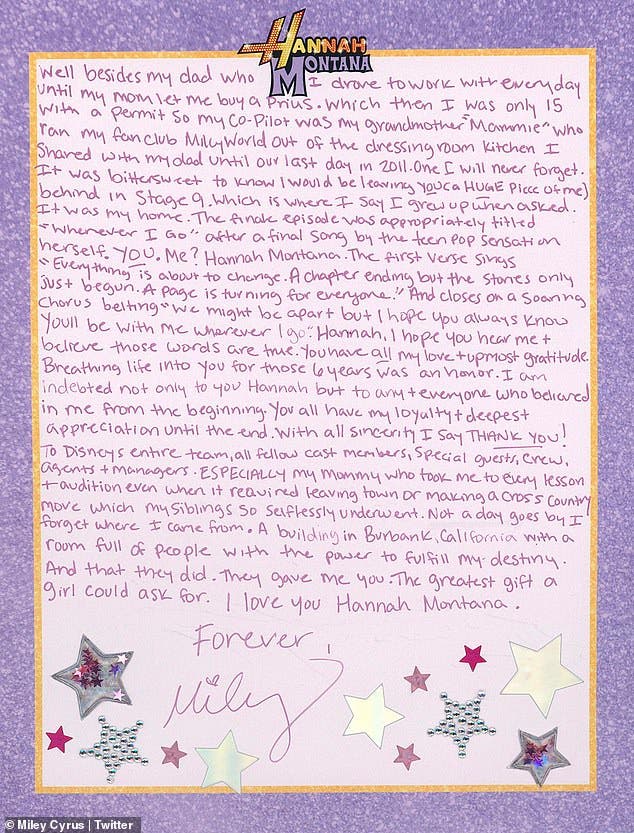 ‘I am indebted not only to you Hannah but to any and everyone who believed in me from the beginning. You have my loyalty and deepest appreciation until the end. With all my sincerity I say THANK YOU!’

She gave a final shout-out to the creators, who Hannah would be literally nothing without.

‘Not a day goes by that I forget where I came from,’ Miley wrote.

‘A building in Burbank, California with a room full of people with the power to fulfill my destiny. And that they did. They gave me you. The greatest gift a girl could ask for. I love you, Hannah Montana.’

Miley wasn’t done there though, deciding to add a lighthearted touch to the message by logging into Hannah Montana’s newly-verified account to quip back: ‘Nice to hear from you @MileyCyrus. It’s only been a decade.’ 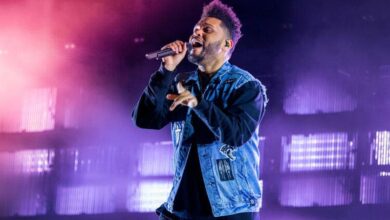