Legislators in the state of Michigan are reportedly considering new measures to ban guns from inside the State Capitol building after armed protesters staged a provocative protest there last week and prompted criticism from across the political spectrum in the United States.

Hundreds of anti-lockdown demonstrators, some of them armed, gathered at the state capitol building in Lansing, Michigan, last Thursday during a session which a skeleton crew of state legislators gathered to consider a measure rebuking Democratic Governor Gretchen Whitmer’s response to the coronavirus pandemic.

The protesters – as well as many legislators – said the governor’s measures, among the most strict in the nation, were excessive. On Wednesday, the Republican-led state legislature sued the governor in an effort to block her emergency measures.

John Truscott, the Republican vice-chair of the Michigan State Capitol Commission, which manages, maintains and restores the buildings and its grounds, told local news outlets in Michigan that the commission is considering the logistics of a possible ban.

“We’ve been dealing with what is the law, what is our jurisdiction. Is there any possibility of limiting people bringing loaded weapons in the building?” Truscott said.

Critics of the gun-toting protesters came from across the US political spectrum after images of them were broadcast across the country. Even Fox News Channel commentator Sean Hannity, a noted conservative supporter of gun rights and confidant of President Donald Trump, described the sight of armed, screaming protesters – many of them dressed in military clothing – as counterproductive to their cause.

“This, with the militia look here, and these long guns, uh… No,” he said. He described the “show of force” as “dangerous”.

Protesters were initially held back from entering the Senate floor – which is off-limits to the public – by police, though they eventually made their way into the public gallery of the Senate. Some marched into the building with rifles slung across their chests, shouting at legislators and security guards in the building. 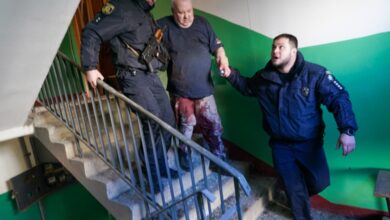