Fatmeh Salman, 43, stirs lentils into bowls of rice, which she received in a weekly food box delivery to help subsidize the cost of meals she cooks for her family of five.

She divides the portions so her three children receive most of the lentils. “What I eat has completely changed; meat is a thing of the past. We can’t afford it, so I need to make sure [my children] get protein,” Salman said.

The list of food items that Salman can no longer afford has grown in the last four months since she lost her job and the national currency lost over 80 percent of its value, causing basic food prices to soar.

Depending on the week, Salman says she often has to cut back on how much she eats to make sure her children are well fed.

“You can’t let the children feel like there’s something missing so you have to sacrifice,” she says.

Salman’s coping strategies are typical of a growing segment of Lebanese who are finding themselves food insecure. Food rationing and cutting back on meals are primary indicators of food insecurity according to the Food Insecurity Experience Scale.

Households across Lebanon have been pushed to desperation by the worst economic crisis the country has seen since the Civil War. The economic impact of coronavirus in Lebanon seems to be the nail in the coffin for a country that is expected to see poverty rates rise to 60 percent by the end of the year, according to the economy minister’s estimates.

According to a recent UN report, over half of the country is now struggling to put food on the table. Even the most basic of household staples – items as simple as rice, salt and sugar – have experienced an alarming 109 percent price hike since September, the report says.

The World Food Program in a rapid assessment released in June indicated that hyper price inflation in Lebanon greatly impacted households’ ability to access food. Of the Lebanese that were surveyed, 41 percent reported not having stockpiled food because they were unable to afford costs and 15 percent reported not doing so because prices changed on a weekly basis.

MEALS FOR AN ECONOMIC CRISIS

The soaring prices have also impacted the quality of meals and required many across the country to alter traditional recipes by removing or replacing unaffordable items including cheese, chicken and red meat.

This is disconcerting because food in Lebanon is more than just about subsistence. Food is about culture and pride. It’s a way of showing love and an event to be shared between family, friends and loved ones.

“I am one of the people and the people are not able to buy meat so it is my duty to help lessen the financial burden for families during this time by teaching them how to make cheaper meals,” Hajj told The Daily Star.

Hajj says he is now making it a priority to teach viewers how to cook two or three meals that cost no more thanLL 25,000 without compromising the flavor or nutritional value. He says he is even teaching viewers how to dry food so it lasts longer outside of the fridge amid worsening electricity cuts.

Rose Deeb, 45, says she has been forced to make adjustments to the meals she makes for her family of four depending on what she needs to buy for the week or month.

“Right now we have to pick and choose between what is expensive and what is necessary,” Deeb says. “If you buy olive oil one week, you know you’re going to buy less milk and no cheese for the month.”

She says that she has almost completely cut out red meat from her cooking, which has altered the flavor of some of her favorite traditional Lebanese recipes including “warak enab” – stuffed grape leaves – and “mahshi” – stuffed zucchinis.

Now Deeb says she tries to stockpile on anything that is cheap including large amounts of rice and bread, which she is eating in bigger quantities.

“Before, we used to buy 1 kilogram of meat a week for large family meals. This is now a dream,” Deeb says.

Those who become food insecure tend to compromise first on the quality of food consumed then on the quantity, says Zeina Jamaluddine, instructor of Public Health Practice at the American University of Beirut.

“People going through food insecurity tend to go for packaged foods and bread, rice and, sugars which are subsidized,” Jamaluddine says. “They’re cheaper. But cheaper energy sources are not necessarily high in nutrients,” Jamaluddine says.

Because of this, Jamaluddine says one of the main concerns is that lower quality diets increases the risk of obesity and non-communicable diseases including diabetes and heart disease.

Lebanon imports around 80 percent of its food. High dependency on food imports makes the country’s food security increasingly more vulnerable to price fluctuations, economic pressures and unpredictable global trade restrictions that can be imposed due to the pandemic.

Among the most vulnerable to food insecurity are marginalized communities, refugees, the unemployed and children.

Deeb says that her children are struggling but rarely complain despite the food rationing.

“My kids suffer more than me but they tell me it’s okay,” she says. Echoing Salman’s sentiments she says, “You have to cook with what you have. You can’t let people around you feel like there is something missing.”

“This is our culture, we keep going with what we have. What else are we supposed to do?” 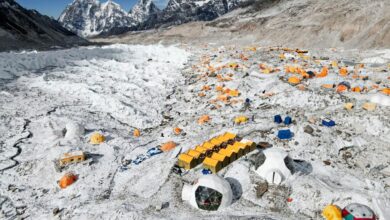 Nepal to move Everest base camp from melting glacier

What Caused The Mass Extinction 359 Million Years Ago? Why Isn’t There Fresh Food in Space?

Spanking has declined in America, study finds, but pediatricians worry about impact of pandemic