A video has been shared online reportedly showing supporters of Iraqi cleric Muqtada al-Sadr punishing a man for insulting their leader by shaving his head.

The video, shared by Al Hurra News correspondent Steven Nabil on Twitter, shows a man being held down and having his head forcibly shaven. Other men in the room are seen coming up to the man and appearing to admonish him.

In his post, Nabil tied the video to the failure of the current ruling elite in Iraq, of which al-Sadr is a key member.

“This is a punishment for insulting Muqtada Al-Sader, the new and democratic Iraq post 2003 has not really been very democratic. Installing and empowering such ruling elites in 2003 has proven to be a major disaster in U.S foreign policy. #Iraq,” wrote Nabil.

Followers of Iraqi Shia cleric Moqtada al-Sadr are being criticized after congregating in their hundreds inside a mosque and chanting “#coronavirus has terrified” others despite government measures imposed to stop the spread of the outbreak.#COVID_19https://english.alarabiya.net/en/News/middle-east/2020/03/24/Moqtada-al-Sadr-s-followers-blasted-for-congregating-amid-coronavirus-outbreak.html … 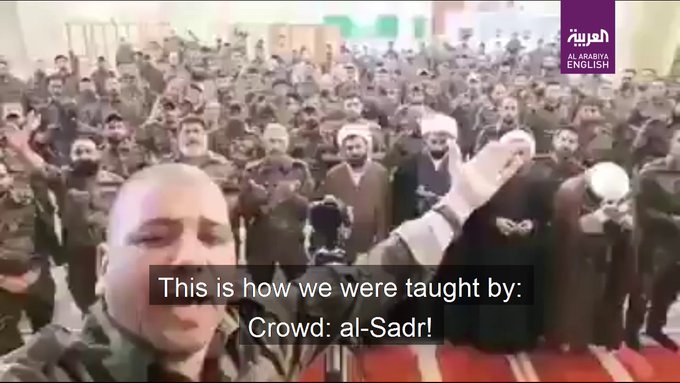 17 people are talking about this

Who is Muqtada al-Sadr?

Shia cleric Muqtada al-Sadr is one of the most important religious and political figures in Iraq. After the US-led invasion of Iraq toppled Saddam Hussein in 2003, al-Sadr emerged as a leading member of the anti-US forces in the country.

Through a network of religious and political offices he gained the support of millions of predominantly Shia Iraqis known as Sadrists. He also set up an umbrella militia, the Jaysh al-Mahdi, which fought against US-led forces and Sunni Iraqis in 2004.

Between 2007 and 2010 Sadr was in exile in Iran. More recently, his parliamentary bloc won the most seats in the 2018 election.

With the breakdown of talks to hold a government, his supporters joined the protest movement that exploded in Iraq in October 2019. However, his supported have been accused of using violence against fellow, unaffiliated anti-government protesters.