Mali’s military junta on Saturday postponed the first meeting over the transfer of power after rising tensions with the main leaders who sparked the August 18 coup.

The junta had invited civic groups, political organizations and former rebels to consultations on Saturday, but said in a statement that the meeting was postponed at the last minute to a later date due to “organizational reasons.”

A protest coalition that had campaigned against former president Ibrahim Boubacar Keita, the June 5 Movement, had not been invited to participate in the meeting.

The group has demanded that the military junta give it a role in the transition to civilian rule which the military has promised, though without a timetable.

The June 5 movement accused the new military rulers of trying to hijack the coup.

“We state with bitterness that this junta which had sparked hope in the hearts of all Malians… is in the process of drifting away from the people,” said Tahirou Bah, from the Espoir Malikoura association, one of the pillars of the June 5 movement.

After an escalating series of mass protests, young army officers mutinied on August 18, seizing Keita and other leaders and declaring they now governed the country. 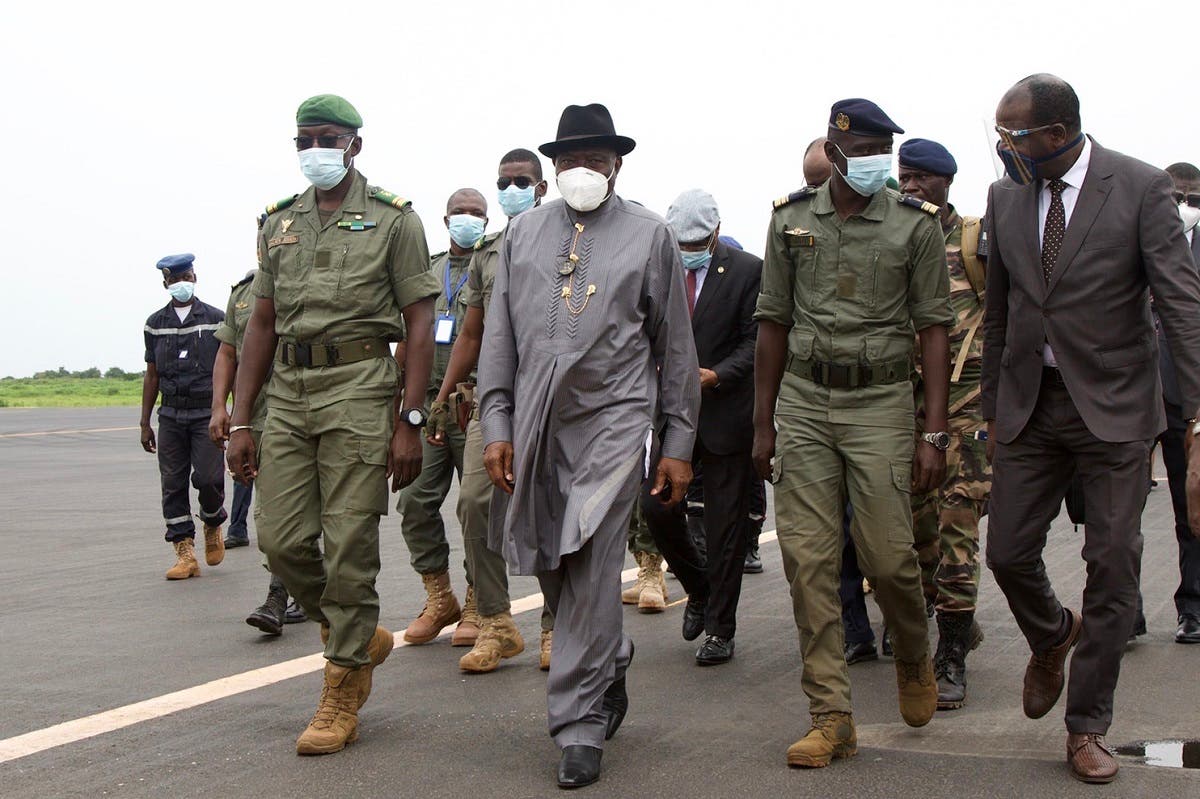 Former Nigerian President Goodluck Jonathan (2L) walks at the International Airport in Bamako upon his arrival on August 22, 2020 next to by Malick Diaw (L), the Vice President of the CNSP. (AFP)

Mali’s influential imam Mahmoud Dicko, a key player in the mass opposition protests that led to Keita’s ouster, said Friday that the new military rulers did not have “carte blanche.”

“We will not give a blank cheque to anyone to run this country, that’s over,” he said.

“We led the fight,” he said. “People have died and the soldiers who have completed (this fight) must keep their word.”

Dicko’s spokesman Issa Kaou Djim later expanded on this saying the imam “said the people have started to doubt” the junta.

“A revolution cannot be confiscated by a group of soldiers,” he said.

His comments came as a new document published on the Malian government’s Official Journal said the junta’s head had been effectively invested with the powers of head of state.

West African leaders, meanwhile, on Friday demanded an immediate civilian transition and elections within 12 months as they considered sanctions.

The West African regional bloc ECOWAS closed its borders with Mali after the coup, banning trade and financial flows as it demanded the release of Keita and other detained officials.

Keita, 75, was elected in 2013 as a unifying figure in a fractured country and was returned in 2018 for a second five-year term.

But his popularity crashed as he failed to counter the raging insurgency and brake Mali’s downward economic spiral.

Number of US troops wounded in Iran attack now at 110: Pentagon

Houthi militia should be sanctioned over tanker in danger of leaking: Rights group