Dancing with the Stars pro Maks Chmerkovskiy said in a video Friday that he’s “safe” in Kyiv but warned of a “dire” situation in Ukraine amid the Russian invasion.

The Dancing with the Stars pro, who is Ukrainian-American, was staying at a hotel in Kyiv when the Russian invasion began earlier this week.

“I’m out here, again, I’m safe. We haven’t been told to move, and I’m just following instructions. That’s all I can say,” Chmerkovskiy said on Instagram Friday. “But the reality is that I’m also talking to my friends that are here, the Ukrainians, and the situation is pretty dire.”

Chmerkovskiy said “people are being mobilized” in Ukraine and that “the whole country is being called to go to war.”

“Men, women, boys … are going forward and getting guns and getting deployed to defend the country,” he said.

Chmerkovskiy said in a second video that he is “not currently trying to leave” Ukraine.

He said Thursday that he will “never be the same” after living through the experience.

“I am not at this point someone who is pleading, you know, for someone else’s safety from a far distance,” Chmerkovskiy said on Thursday in an emotional video. “I’m somebody who’s about to go into a bomb shelter, because shit’s going down.”

Chmerkovskiy’s wife, fellow Dancing with the Stars pro Peta Murgatroyd, asked for prayers for Chmerkovskiy in an Instagram post Thursday.

NATO leaders and heads of member states attended an emergency meeting Friday to address the latest developments in the invasion.

“I’m gonna do my best to make sure that I’m as safe as possible, but I’m not moving towards the border currently. I heard it’s not safe,” he said. 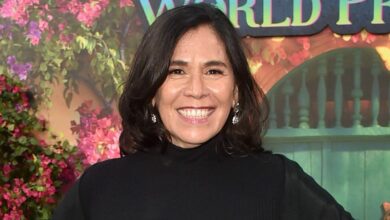