This comes shortly after the singer retweeted a post that reads: ‘in every step of success you will find a dog waiting for you’, meaning that the road to success is paved with obstacles.

After retweeting the post, Assala wrote: ‘but thank god they only bark and not bite’.

Soon after, Mai Al Eidan took to her Instagram to throw shade at Assala, ‘I promise you Assala what you’re saying is true, you reminded of someone who thinks of herself as a bat, she keeps marrying men from different nationalities, sucks their blood, and leave them on the side of the road.’ 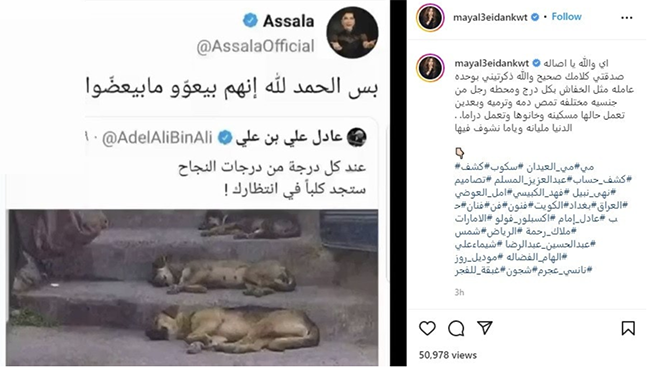 Mai added: ‘then she plays the victims claiming that they cheated on her, causing a dramatic scene’.

Mai not the only Kuwaiti personality who claimed that the post was about her, as also media personality Fajr Alsaeed shared Assala’s tweet on her on Twitter page, writing ‘what are you!!! who are you talking about’ replying to Assala, she continued: ‘if you were talking about me just let me know because my answer to you is ready, and if you are not talking about me, then I’ll let it slide.’

Syrian singer Assala responded to both Kuwaiti media personalities with a clip from her song ‘Shukran’ (Thank You), she captioned: ‘this song is for the people who harmed me, and the people who tried to but couldn’t’ ‘I Feel Like Pretty Much All the Rappers Right Now Are Lying’, Says Billie Eilish