As articles about the coronavirus pandemic flood my Facebook feed and the numbers of people sick and dead climb, I am experiencing deja vu.

l first felt the dread associated with dealing with an epidemic 20 years ago, when I was 11 years old and living with my family of six in a wooded, suburban neighbourhood in North Potomac, Maryland. It was the year 2000, and one morning my mother shouted uncharacteristically from her bedroom down the hall. Startled, I raced in to find her confronting her reflection in the bathroom mirror.

“I can’t move this side of my face,” she slurred, pointing to her right side. Still bleary with sleep, her right eye and corner of her mouth drooped as if they had suddenly become too heavy for her. Half of her flushed face was mysteriously paralysed.

Her experience of Bell’s palsy was just a new bullet point in an elongating list of symptoms of a then-undiagnosed condition that my typically healthy 41-year-old mother endured that year. After months of malaise, shooting pains throughout her body, dizziness, vomiting, leg paralysis, and inaccurate speculations by doctors about whether she had kidney disease, Lou Gehrig’s disease, thyroid disease, or a mental illness, an infectious disease doctor finally diagnosed her with neurological Lyme disease, which is caused by the spiral-shaped bacteria Borrelia burgdorferi and spread by deer ticks. Due to the seriousness and progression of the disease, she received six weeks of intravenous treatment, a year of antibiotics, and a year of physical therapy.

Lyme disease upended my family’s life as suddenly as COVID-19 has affected families around the world: With no warning, and, as we would soon discover, leaving a long trail of damage in its wake.
It strikes again

Almost as soon as my mother recovered, my father also contracted Lyme disease. He woke up one day with numbness in his arms, excruciating nerve pain throughout his body, and puzzling neurological symptoms including confusion, memory issues, and distorted vision. After blood tests came back overwhelmingly positive for Lyme, he too received an IV for six weeks, as well as two-and-a-half years of oral antibiotic treatment. His symptoms did not abate until a decade later.

My three siblings were next. As I concerned myself with the activities of a teenager in high school – chores, studying, playing recreational football and hanging out with friends – my twin brother and younger sisters shuffled in and out of doctor appointments, complaining of fevers, aches and malaise. My brother also experienced serious memory issues and joint pain, which undermined his academic performance. After missing several days of school, they were diagnosed with Lyme disease and another tick-borne illness, Rocky Mountain spotted fever, respectively, treated with antibiotics, and eventually recovered.

At 16, depressed and wearied by the pressure of standing in as a caregiver while my family members convalesced, I finally caught up with them. A doctor attributed my chronic daily headaches and rashes to Lyme disease and successfully treated me with antibiotics, too.

We all recovered physically from these diseases long ago, but the anxiety of living with an invisible enemy never fully dissipated. I spend less time outside than I used to. I am obsessed with identifying every dark speck on my body. And now that another invisible enemy has arrived, I am wiping packages, groceries, and counters with familiar alertness.
How epidemics rhyme

Although most would not know it due to long-standing controversy within the medical community as well as the lack of media attention, Lyme disease has, like COVID-19, mushroomed into a global epidemic. It is the most common vector-borne illness in the United States, with 30,000 cases reported to the US Centers for Disease Control and Prevention (CDC) each year by state health departments, although experts believe true numbers are at least 10 times higher. The numbers also do not reflect the prevalence of post-treatment Lyme disease (a case of Lyme that does not improve after the usual course of antibiotics), which affects as many as two million people in the US alone. Some scientists say the number of Americans infected by Lyme eclipse the number of Americans diagnosed with breast cancer, HIV, and hepatitis C combined.

Certainly, the diseases do not compare. COVID-19 is extremely contagious and spreads from person to person, while only infected ticks are known to transmit Lyme and other tick-borne diseases to people. Also, COVID-19’s symptoms appear limited, whereas Lyme symptoms vary from person to person, depending on the stage, the aetiology of the disease, or the particular strain of bacteria. Most frightening about COVID-19 is the respiratory problems it can cause, whereas Lyme, in its late stages, can damage the brain or heart.

Still, as the US government holds one news briefing after another about the COVID-19 pandemic, I see how the CDC has bungled its response to both outbreaks in similar ways. The agency developed restrictive diagnostic criteria that led to the underreporting of COVID-19 initially, just as it limits diagnoses of Lyme disease to those who meet certain criteria. As a result, my family coped for months, possibly years, with a disease without immediate answers. How is a person supposed to get better if a doctor who should be in a position to know cannot diagnose you, or assumes that you are mentally ill rather than physically sick?
Struggle to get tested and treated

As people in the US struggle to get tested for COVID-19, I am thinking of the difficulty of getting tested for Lyme disease. Although Lyme first appeared in the medical literature more than four decades ago in 1975, there is still no reliable way to test people for the bacteria that causes Lyme disease. The blood tests we do have test not for the bacteria, but for the body’s antibody response to the bacteria, which, when used early on in the infection, comes back negative until antibodies rise to detectable levels. Without the tests, a doctor can make an early diagnosis on seeing the characteristic rash, erythema migrans, which sometimes looks like a bull’s eye. However, it does not always appear – it did not for me, my brother, or my parents – and sometimes it can be hidden in hair. As a result, many who are infected go undiagnosed or misdiagnosed, which can lead to worse or ineffective treatment outcomes. Lyme can even be deadly.

There is also no treatment yet for COVID-19, and while there is one for Lyme disease, it is not always successful, even when infected patients are diagnosed in the early stage of the disease. While many studies show an approximately 20 percent treatment failure rate, a Johns Hopkins University study showed that 39 percent of patients with early Lyme continued experiencing symptoms six months after treatment. Yet, the guidelines for treating Lyme disease have not changed in decades.

With trials for a COVID-19 vaccine under way, it is hard for me to feel enthusiastic when there is no Lyme disease vaccine on the market. While one pandemic grows, another is growing unchecked.
Silver lining

I am heartened by individuals, automobile companies, and clothing designers rallying to handmake personal protective equipment and other medical equipment for healthcare professionals. For all the gloom and doom that surrounds us, this is an opportunity for all of us to examine how we live, what we value, and whether our behaviours have reflected those values. When all this is over, can we harness the same energy we are giving to a fast-moving threat to slower-moving ones like Lyme disease and climate change? Can we stop minimising what is avoidable and foreseeable from a distance? Can we continue to demonstrate social responsibility going forward?

As I spoke with family members to get their recollections on our experience with Lyme disease, I realised how long it had been since the last time we talked about it. For us, those years were a time of confusion and alienation, and we buried them, even as they manifested in our current lives in other ways. Some people did not believe us at the time when we explained our symptoms and how the disease had ravaged our family. Sometimes, we did not even believe ourselves.

But this time is different. Now, as we read about other families all around us coping with an invisible disease while in quarantine, we somehow feel less isolated. It is as if the pandemic validated our earlier experience with an epidemic, and reignited that desire to understand it, mitigate it, and join a larger response to it.

With kids of his own now, my brother says he now sees his family as interconnected with everyone else’s.

“This time I’ve had at home with my family is something I’m never going to forget,” he told me over email. “We’ve grown closer than ever in these past few weeks and I wouldn’t trade it for the world.” 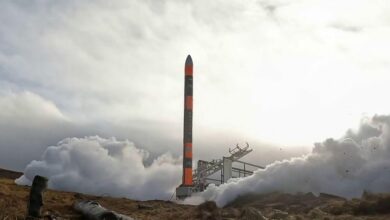 First Skyrora space launch ditches in the sea off Iceland

Is This Britain? Desert Storm Inundates The UK