Videos showing Iranians kissing and licking Shia shrines despite the risks of coronavirus have gone viral online, amid controversy over calls to close access to the shrines as the country continues to suffer from an outbreak of the deadly virus.

Iran has reported the highest number of coronavirus cases in the Middle East, many of them in Qom, home to several Shia shrines. While Saudi Arabia has suspended access to Mecca for pilgrims on Umrah, Iran has not responded to increasing calls to limit access to Qom to halt the spread of coronavirus.

Keep track of all breaking coronavirus news in our dedicated section.

“Stop scaring the people this much with coronavirus,” said a man filming himself at the Fatima Masumeh shrine in Qom in one of the videos.

He attacked those who have stopped visiting the shrine following the coronavirus outbreak, then proceeded to kiss the walls of the entrance of the shrine as well as the shrine itself.

“Stop toying with people’s beliefs, coronavirus is nothing in the Shia shrines,” he said in response to calls to close down the shrine.

The individuals partaking in the online trend aim to prove that the spread of coronavirus in Iran will not deter them from visiting the shrines, which many Shia consider to have healing affects.

Don’t do this. Ever. But especially during the #coronavirus outbreak.

224 people are talking about this

The videos were filmed in Qom and Mashhad, Iran’s two main religious cities.

The representative of Iran’s Supreme Leader Ayatollah Ali Khamenei in Qom had previously urged Iranians to visit the Fatima Masumeh shrine, calling it a “place of healing,” despite the coronavirus outbreak in the city.

“I am going to lick here to take in all the coronavirus,” says a man in another video from the same shrine in Qom, before proceeding to lick the shrine.

A third video shows a young boy licking and kissing the door of a shrine as an older man films and praises him.

359 people are talking about this

The Shia shrines in Iran, which attract millions of Shia pilgrims every year, have remained open despite coronavirus concerns and are touched and kissed by thousands of pilgrims every day.

“We consider this holy shrine to be a place of healing. That means people should come here to heal from spiritual and physical diseases,” said cleric Mohammad Saeedi. 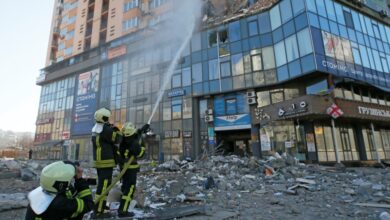