Soldiers from Libya’s internationally recognised Government of National Accord (GNA) attacked an airbase controlled by the forces of renegade military commander Khalifa Haftar.

The operation was launched early on Tuesday by troops loyal to the Tripoli-based GNA, which managed to seize control of major parts of the al-Watiya airbase, southwest of the capital, sources said.

He added the two sides were exchanging heavy fire.

“This battle for al-Watiya has been prepared for by government forces over the past few weeks, by air strikes from government drones targeting Haftar’s forces and locations in and around al-Watiya airbase,” he said.

The airbase has been used to launch air raids on forces loyal to the GNA. It is regarded as a key facility in the country and was captured in August 2014 by Haftar – who used it as his headquarters for launching operations in Libya’s west.

A GNA source, who spoke on condition of anonymity, said heavy artillery paved the way for troops to launch the ground offensive. “Clashes are raging on near the base,” the source told Anadolu news agency.

Oil-rich Libya has been engulfed in chaos since 2011 when longtime leader Muammar Gaddafi was killed in a NATO-backed uprising.

It is now split between two rival administrations: The GNA and the eastern-based House of Representatives allied to Haftar.

Haftar’s fighters have suffered a series of setbacks in recent weeks in their year-long campaign to seize Tripoli, with pro-GNA forces expelling them from two key coastal cities west of the capital.

The LNA’s military defeats have coincided with Turkey’s entrance into the conflict, and its use of weaponised drones targetting Haftar’s troops and supply lines.

Turkey on Tuesday called on all powers supporting Haftar to “rethink their position and invest” in the Libyan government. 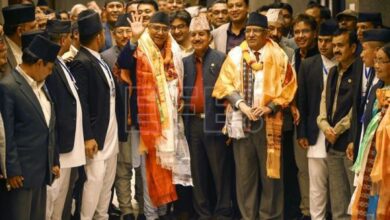