In a statement on Saturday, military spokesman Mohamed Gnunu said troops loyal to the Tripoli-based Government of National Accord (GNA) overran the Yarmouk, al-Sawarikh and Hamza camps.

“Our heroic forces are chasing the remnants of Haftar’s terrorist militia and are continuing their progress,” Gnunu said on his Twitter account, without elaborating.

With Turkish help, the GNA has seized a string of towns in recent weeks, captured a strategic airbase, and destroyed several of the LNA’s Russian-made air defence systems.

In a two-minute audio speech addressed to his forces on Saturday, Haftar said they “will fight and fight” against what he called “Turkish colonialism”.

“To our brave officers and soldiers, you are fighting a holy war that is open to all fronts, a comprehensive war in which there is nothing but victory,” Haftar said in the speech.

“Al-Yarmouk military camp had been set by the LNA as some kind of central command to run the battles in southern Tripoli,” he said.

“The base was controlled by Russian mercenaries from the Wagner Group … The government has told displaced civilians not to return to their homes because LNA forces have set up land mines in civilian areas in the same way ISIL set up IEDs in the city of Sirte in 2016.”

Saturday’s announcement comes days after Ahmad al-Mesmari, a spokesman for Haftar’s forces, said his fighters would pull back from some positions south of Tripoli.

The withdrawal, he said, was part of a “redeployment”.

Fighting has recently escalated between Libya’s warring sides despite international calls for a humanitarian truce in the country to focus efforts on battling an outbreak of the new coronavirus.

Earlier this week, GNA forces seized al-Watiya airbase, near theTunisian border, a strategic base in Haftar’s offensive to capture Tripoli.

US President Donald Trump called for a “rapid de-escalation” of the Libyan conflict on a call with Turkish counterpart Tayyip Erdogan on Saturday.

The GNA’s surge has put pressure Haftar’s 13-month campaign to seize the capital Tripoli and has squeezed his foreign backers Russia, Egypt and the United Arab Emirates (UAE).

As the LNA has promised to respond with a massive air campaign, diplomats have warned of the risk of a new round of escalation with the warring sides’ external backers pouring in new weaponry.

Turkey “will not bow to threats by Haftar or anyone else”, Turkey’s presidential spokesman Ibrahim Kalin said separately in an interview on NTV.

“The international community must take a stand against Haftar. We need to go back to the table for a political solution as soon as possible,” Kalin said. 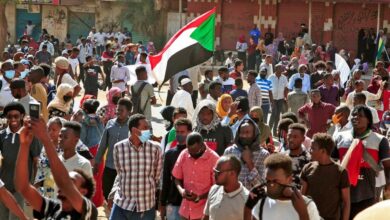 Malawi presidential election: Who are the candidates?