The ‘Someone You Loved’ hitmaker – who lives with his parents – admitted he isn’t feeling too inspired by the ongoing lockdown amid the coronavirus pandemic.

Talking on Instagram Live, he said: “I’m trying my best but if I’m honest there’s nothing less inspiring than living at home with your parents during a lockdown when your dad is watching the news and then my mother, she’s recently discovered memes.

“And let me tell you, it has been the bane of my existence for the last few weeks. All she does is shove her phone in my face with memes.

“Even when I think I’m safe in my room she’ll send me pictures.”

The 23-year-old Scottish singer claimed he keeps “getting interrupted” whenever he tries to work on new tunes, and teased the possibility of his mum impacting his lyrics.

He added: “So that’s not a very inspiring environment to create in. I’ve been trying to write but it’s been going awful because I keep getting interrupted with memes.

“So expect a meme-based album if I haven’t been killed by my mother.”

Meanwhile, Lewis recently shared seven unreleased songs – which weren’t included on his debut album ‘Divinely Uninspired to a Hellish Extent’ – with fans on social media, despite admitting he wasn’t sure if he was actually allowed.

He said: “This is a song that’s never been heard before from me. We did this on the same day we did ‘Someone You Loved’.
“Am I allowed to do this? I think so. I’ll just f***ing play it any way.

“We wrote this song first — it’s half-finished, so the words are all over the shop and stuff.

“And then we decided to stop writing this song and instead write ‘Someone You Loved.’ “

Horeya Farghaly’s Nose Is Saved From Falling By Using Her Ribs Bones! (Pictures) 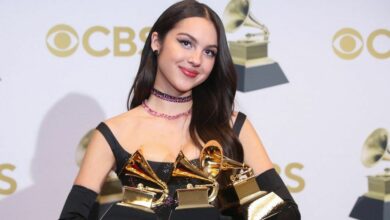 Courteney Cox Opens up About Romance During COVID-19