Haters take note. Camila Morrone won’t let the critical comments about her relationship with Leonardo DiCaprio get her down.

The model and actress, who has clapped back at haters in the past, is very much aware of the negative comments online. However, despite their age gap and constant media attention, Morrone, 22, and DiCaprio, 45, have been going strong for two years now. And, while interest in their romance only continues to increase, Morrone is trying to make a name for herself outside of their romance.

In fact, the rising star is featured in WSJ. Magazine‘s annual Young Hollywood portfolio, released on Tuesday. In the feature, which highlights Hollywood’s ones-to-watch, Morrone explains how she handles all of the attention that’s focused on her relationship.

“More exposure leads to more judgment and negativity,” Morrone tells the outlet. “It’s a little bit of a bummer because you’re really trying to do good work and be nice and be a good person, and in the meantime…people wish negative things upon you.”

How does Morrone deal with all of the hateful comments? She takes a step back and attempts to avoid the online commentary.

As the Mickey and the Bear star tells the outlet in a powerful statement, “It would never take away the joy of the craft that I get to do.”

Leonardo DiCaprio Helps Rescue Stranger Who Fell Overboard
It was just last month that Morrone addressed her and DiCaprio’s age gap in an interview with the Los Angeles Times.

“There’s so many relationships in Hollywood — and in the history of the world — where people have large age gaps,” Morrone shared. “I just think anyone should be able to date who they want to date.”

WSJ. Magazine‘s February Talents and Legends Issue is out on newsstands this Saturday, Jan. 18. 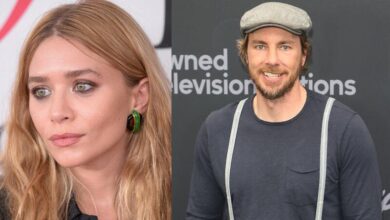