A decision to allow Lebanese depositors to withdraw their foreign currency deposits at the black-market rate has drawn strong criticism on social media.

Those with deposits of over $3,000 will be able to withdraw their money “according to market rates” published daily by banks, according to a circular from Lebanon’s central bank the Banque du Liban.

Black market exchange rates reached 3,200 Lebanese Lira against the dollar on Monday this week. The BDL has pledged to intervene to bring it below 2,600 LL by the end of the week, but is far from reaching the previous peg of 1,500 LL to the dollar.

Depositors with less than $3,000 will still be able to withdraw local currency at a rate of 2,600 LL – considerably below the black market price – as per a circular published last month.

Lebanese economist and financial journalist Mohammad Zbeeb claimed the BDL had passed on the haircut – a financial term referring to a loss incurred to a creditor – to small account holders.

“The aim of this is to protect the owners of large deposits and bank capital from any direct deduction,” he said in a tweet. 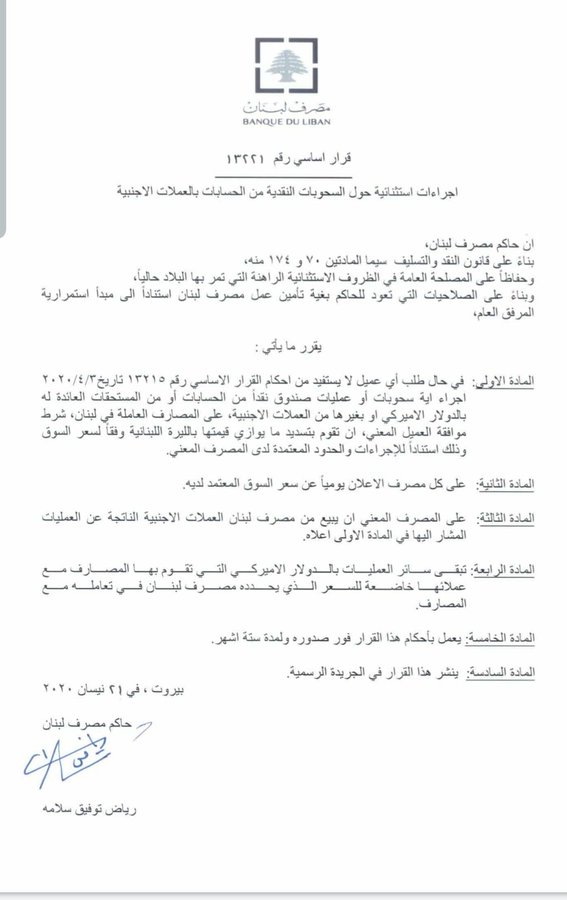 208 people are talking about this

Many also believe that the decision will have considerable negative repercussions for the future of Lebanon’s economy, by encouraging more LL withdrawals.

Mike Azar, a financial adviser, described the process of “Lirafication” – effectively encouraging the conversion of foreign currency into local currency – as “catastrophic.”

Azar and other critics allege that the circular directly contradicts a leaked financial blueprint for the heavily-indebted country, drawn up between the government and its financial advisers, Lazard.

“This will convert BDL losses in USD into massive losses in Lira – it shifts losses from the Banks to BDL. Hard to understand the rationale for this other than to undermine the government plan and the government’s response, which was specifically opposed to Lirafication and for good reason,” he said in a tweet.

The draft plan, currently being discussed by the cabinet, pledged to preserve the assets of small accounts which make up more than 90 percent of all deposits.