Various attempts to dismantle Lebanon’s heavily criticized domestic worker sponsorship program have failed over the years, and now, new research shows that some in Lebanon benefit financially from the system, leaving little impetus for a corrupt ruling elite to abolish it.

Activists estimate that one to two migrant workers die in Lebanon every week, yet the kafala system persists as it props up a financially lucrative industry where recruiters, government entities, and service providers benefit, argue researchers Jonathan Dagher, David Wood, and Jacob Boswall.

The primary beneficiaries from the kafala system are local recruitment agencies who earned approximately $57.5 million in revenues in 2019 alone, according to the findings of Beirut-based Triangle Research, Policy and Media Centre.

This is assuming the minimum recruitment fee is earned, estimated to range between $1,800 and $4,300 by the Syndicate of Owners of Recruitment Agencies in Lebanon (SORAL); the fees depend on the agency and the worker’s nationality.

There is no definitive data on the profit generated by beneficiaries of the kafala system due to lack of transparency in the industry, but “it is definitely profitable,” said Boswall, who is an economic researcher at Triangle.

Deemed as a form of “modern day slavery” by Human Rights Watch, the kafala system excludes migrant workers from Lebanon’s labor laws and gives authority of their immigration status and employment to a sponsor (kafeel) instead.

There were attempts to reform aspects of the current system over the past months, but they have been struck down.

“The lobbying led by SORAL against reforms in the last few months was motivated by private economic interests,” he told Al Arabiya English. SORAL was the main group that lobbied against reform attempts. 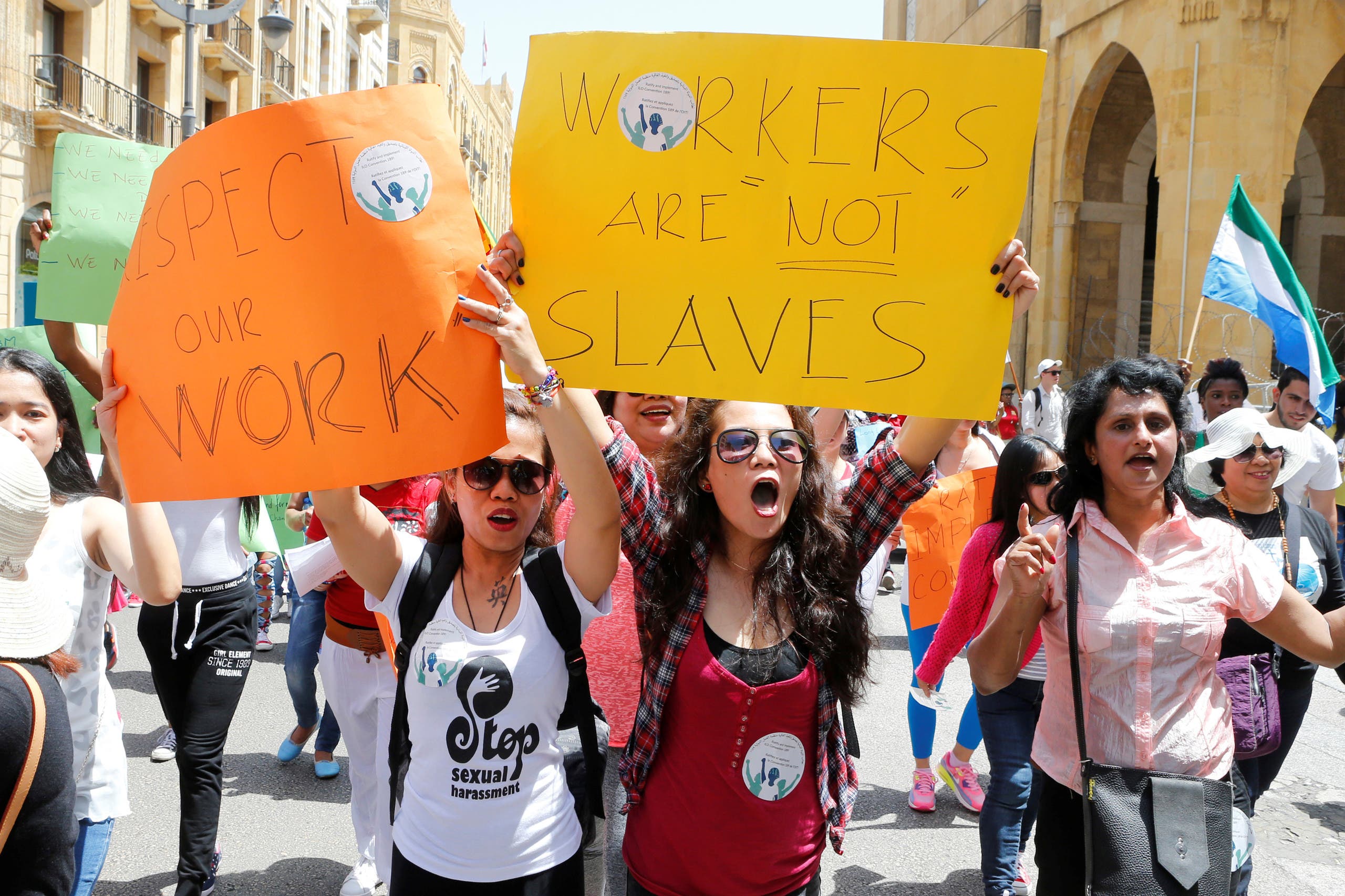 Behind the recruitment agencies, the second largest beneficiary of this exploitative system are government institutions. Migrant workers generate an annual revenue of $36.5 million for the General Security Directorate and $6.1 million for the Ministry of Labour in residency and labor permits, according to the reports estimates.

Other parties that financially benefit from the kafala system are local service providers. These include medical labs who perform health screenings, insurance firms that provide basic health insurance packages for workers, and public notaries. The revenue for each institution amounts to $1 million, $1.6 million, and $2.9 million respectively.

A standard unified contract for domestic workers that was proposed by caretaker minister of labor Lamia Yammine in September was successfully appealed in the Shura Council, Lebanon’s highest legislative court. The recruitment agencies’ syndicate pushed back hard against the contract updates for “negatively impacting the industry of domestic workers recruitment in Lebanon and contravening the labor law.”

Local recruitment agencies’ annual revenues account for roughly 60 percent of the industry’s total profit, and they would have the most to lose if the kafala system was dissolved, said Boswall.

The updated contract would have granted workers basic labor rights, like terminating their work contract without their employer’s consent, working for designated hours per week and being paid overtime, and being granted separate, private accommodation, among other provisions. 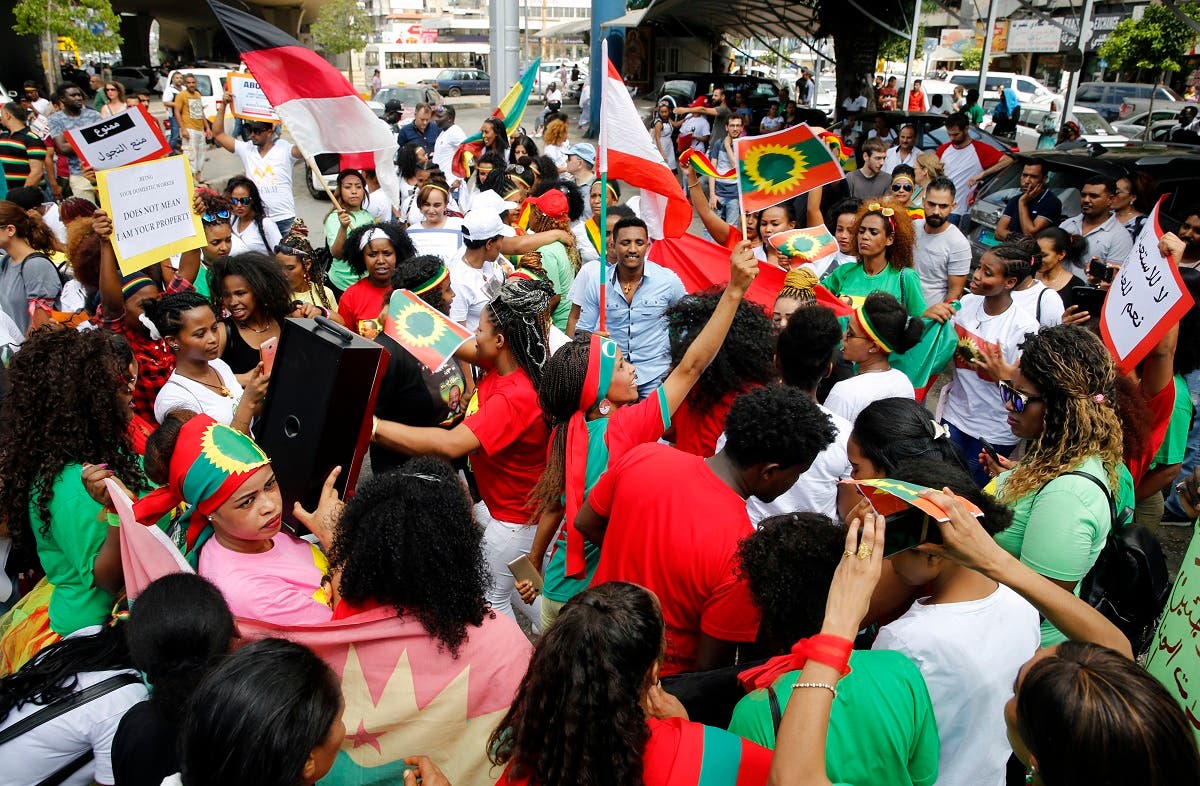 Migrant domestic workers dance during a rally to mark International Domestic Workers Day, in Beirut, Lebanon, Sunday, June 24, 2018. The protesters are demanding that the Kafala, or sponsorship law, be abolished, and called for better treatment. The Kafala system ties workers to their employers whose consent is needed for renewal of residency permits, changing jobs or for workers to return home. (File photo: AP)

The revised contract was perceived as a “crucial first step toward dismantling kafala in Lebanon” by the International Labour Organization, but it would have significantly shrunk the $100 million annual revenues generated by the system, Triangle’s report concluded.

Currently, as Lebanon struggles with one of the worst economic crises in its history, migrant workers are being denied meager wages as employers struggle to obtain dollar bills in a country with dwindling foreign reserves. If they are paid, workers are typically given salaries in Lebanese pounds, the crashing local currency, slashing their wages by nearly 80 percent.

The cost of many basic goods, which workers have to purchase themselves, in the country have doubled.

“If they dare protest or ask for their rightful pay, they would be beaten up and abused,” continued Yilma.

Prior to the ongoing economic crisis, foreign domestic workers used to earn between $100 and $300 a month depending on their race and nationality, said Yilma. The minimum wage in Lebanon is $450 a month.

Aside from being denied months of pay, many domestic workers were thrown out onto the streets with their belongings packed in trash bags, and left stranded with no money, food, water, or their passports. 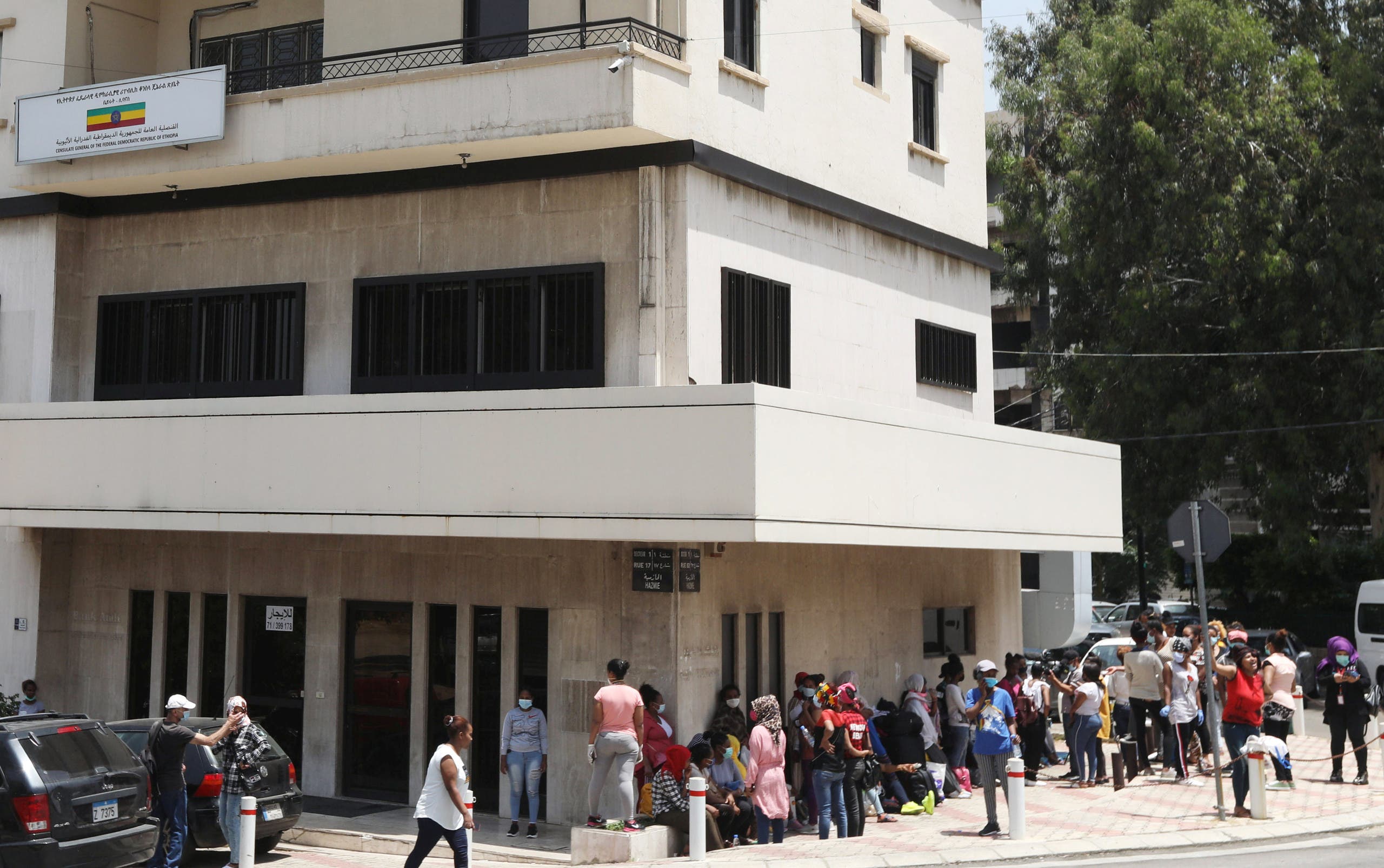 Ethiopian domestic workers wearing masks stand with their belongings in front of the Ethiopian consulate in Hazmiyeh, Lebanon, June 8, 2020. (Reuters)

In the absence of government action to protect these women, Egna Legna launched a campaign to send migrant workers back home. So far, they have repatriated 300 women and children, with 100 more to be sent back in coming days.

“We have women calling us every day, telling us they’re trapped in homes,” Yilma told Al Arabiya English. “They tell us that they’re miserable and thinking of hurting themselves, and we don’t have the authorization to go get them from these homes.”

While the proposed unified standard contract would not have fully eradicated the kafala system, it would have ensured basic protections afforded to other workers in Lebanon. But between the money hungry stakeholders lobbying to protect the kafala system and the absence of a constitutional government that can legitimately propose reforms, migrant domestic workers are trapped in the middle, paying the price.