Scattered groups of protesters arrived in the capital’s downtown area, only some of them wearing masks and face shields to protect against the spread of the coronavirus, in response to calls for a centralized protest to press for demands. But tensions and divisions among protesters were clear.

Lebanese rose up against their political leaders in nationwide mass protests on October 17 amid a spiraling economic crisis, blaming them for decades of corruption and mismanagement. The protests, which further deepened the slump, eventually lost some momentum and later were put on hold after the outbreak of the pandemic.

Lebanese Army separating protesters from Hezbollah and Amal Movement supporters in Downtown Beirut. Rocks being hurled at Army and tensions rising. In the video, pro-Hezbollah side can be heard chanting “Shia, Shia, Shia.”#LebanonProtests 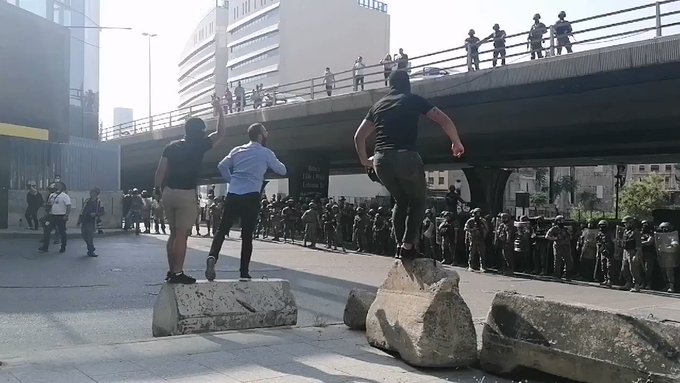 The unprecedented economic crisis, nationwide protests and pandemic pose the biggest threat to stability since the end of the country’s civil war in 1990, and there are fears of a new slide into violence.

In recent weeks, the Lebanese pound, pegged to the dollar for more than two decades, has lost 60 percent of its value against the dollar and prices of basic goods soared. Unemployment has risen to 35 percent and an estimated 45 percent of the country’s population is now below the poverty line.

Standing now exactly in the middle: to my right Riot police keeping protestors back and to my left the Lebanese army keeping Anti-protestors group away.#لبنان__ينتفض#lebanon #LebanonProtests 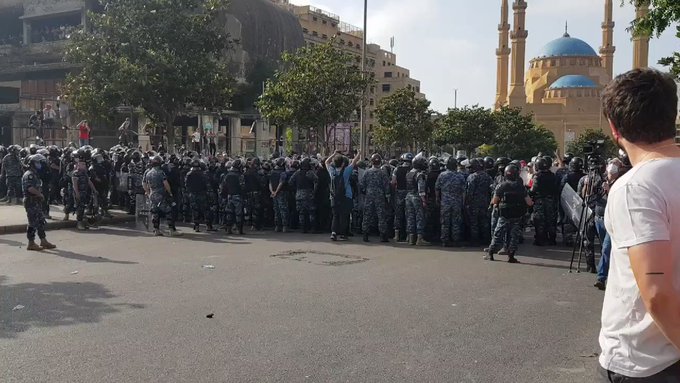 Demands for Hezbollah to disarm

The government has gradually begun easing a lockdown aimed at curbing the virus, and protesters have returned to the streets in small numbers in recent days. Saturday’s protest was called for by grassroots organizations and civil society groups as well as several political parties, including some groups who have introduced demands for the militant group Hezbollah to disarm.

The participation of political groups and anti-Hezbollah slogans have upset some activists and protesters who say the focus should remain on addressing the country’s economic crisis and calling for early elections.

Hundreds of Lebanese soldiers and riot policemen were deployed on major roads in the capital and its suburbs ahead of the protest. They later stood between various groups amid minor scuffles and stone-throwing incidents.