The Lebanese prosecutor probing last summer’s port explosion in Beirut filed charges on Thursday against the caretaker prime minister and three former ministers, accusing them of negligence leading to the death of hundreds of people, Lebanon’s official news agency said.

All four were charged with carelessness and negligence leading to death over the Aug. 4 explosion at Beirut’s port, which killed more than 200 people and injured thousands. The explosion was caused by the ignition of a large stockpile of explosive material that had been stored at the port for years, with the knowledge of top security officials and politicians who did nothing about it.

The four are the most senior individuals to be indicted so far in the probe, which is being conducted in secrecy. Anger has been building up over the slow investigation, lack of answers and the fact that no senior officials have been indicted.

About 30 other security officials and port and customs officials have been detained in the probe so far. 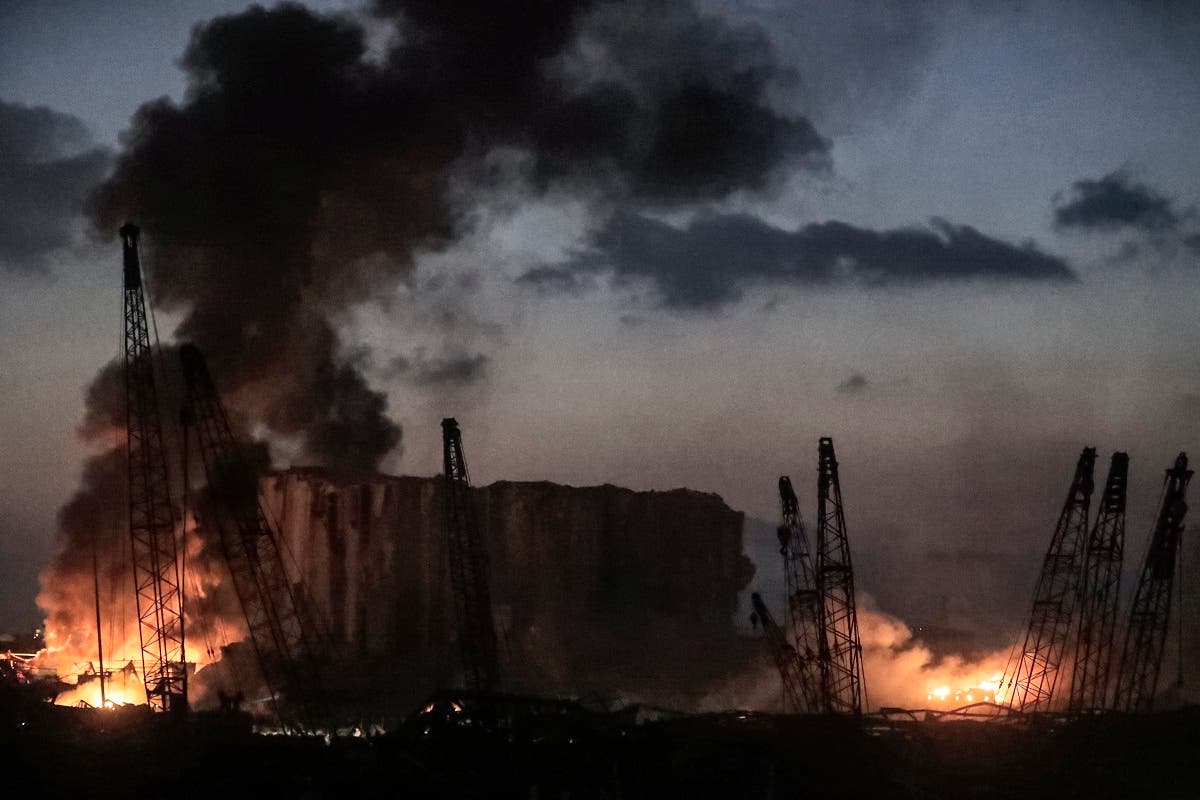 This picture taken on August 4, 2020 shows fires burning at the port of Lebanon’s capital Beirut with its cranes in the aftermath of a massive explosion. (AFP)

Diab, a former professor at the American University of Beirut who became prime minister late last year, resigned a few days after the blast, which leveled the country’s main port and destroyed large parts of the city. Diab has continued to function in caretaker capacity while efforts to form a new government has floundered amid political disputes.

Diab said his conscience is clear and he is confident of his “responsible and transparent handling of the port explosion file.”

In a statement issued by his office later Thursday, he said he is “surprised by this targeting that goes beyond the person to the position. Hassan Diab will not permit the position of the prime ministry to be targeted by anyone.”

The blast is considered to be among the largest non-nuclear explosions ever to be recorded.

Documents surfaced soon after the explosion showing that at least 10 times over the past six years, authorities from Lebanon’s customs, military, security agencies and judiciary raised the alarm that a massive stockpile of potentially dangerous chemicals was being kept with almost no safeguard at the port in the heart of Beirut.

President Michel Aoun, in office since 2016, said he was first told of the stockpile nearly three weeks before the explosion and immediately ordered military and security agencies to do “what was needed.” But he suggested his responsibility ended there, saying he had no authority over the port and that previous governments had been told of its presence.

Since the material arrived in Lebanon in late 2013, four prime ministers have been in office during the past seven years.

Najib Mikati, Tammam Salam and Saad Hariri have reportedly said that they were not aware of the existence of the material at the port. Diab has said was only informed about the presence of the “explosives” days earlier and planned to visit the site. He told reporters earlier this year that he canceled his visit to the port after he was told that the material were fertilizers.

Investigators probing the blast had so far focused on personnel at the Port of Beirut. Judge Sawwan said he has set next Monday, Tuesday and Wednesday as dates for interrogating the four as defendants.

Both Khalil and Fenanios were sanctioned by the US in September this year, the first two officials to be subjected to those outside of Hezbollah group.

Trial of Syrian officers in Germany to shed light on Assad reign of terror: Lawyers