Lebanon’s new government aims to make progress towards starting full negotiations for an IMF deal by the end of this year or early next, but is not expecting funds to be dispersed before elections in March, a minister said on Friday.

In an interview with Reuters, economy minister Amin Salam also said Lebanon has lost precious time in dealing with the economic meltdown because of a crisis over the probe into the Beirut port explosion which has paralyzed cabinet.

Lebanon is suffering one of the world’s sharpest ever economic depressions and an IMF deal is widely seen as the only way for it to secure aid.

Salam said that figures crucial to progress on the IMF track – including Lebanon’s estimate of losses in its financial system – would be sent to the Fund as early as next week.

While there was no agreement yet on how the losses should be distributed, “opinions are much closer and the picture is much clearer”, he said. He declined to give figures which he said it was up to the finance ministry and central bank to provide.

But he indicated he did not expect the government to clinch a full IMF agreement before parliamentary elections set for March 27, saying no money was expected to be dispersed before the vote, after which a new cabinet would be formed.

IMF talks broke down last year because the banks, central bank and Lebanon’s ruling politicians could not agree with the previous government on scale of vast losses, estimated at the time at around $90 billion, and how they should be shared out.

An IMF program is widely seen as the only way Lebanon can unlock desperately needed aid.

Prime Minister Najib Mikati took office in September vowing to remedy one of the world’s sharpest ever depressions.

His government was already facing a difficult path to pave the way for an IMF deal before Lebanon slid into yet another crisis, this time linked to the probe into the port blast which has ignited a new political conflict and deadly street violence.

Cabinet has not met since Oct. 12 because of the standoff.

Still, Salam and other officials met the Fund this week as technical talks got underway.

The message delivered by IMF officials was “we want to focus on what went wrong in the first phase and that is defining the losses and giving an idea about their distribution”, he said.

The government has “huge hopes” that it can secure an IMF memorandum of understanding, including the figures and financial recovery plan, late this year or early next to open the way to negotiations.

Lebanon hopes to secure at least $2 billion from the IMF in an agreement that would unlock other foreign aid, he said.

But Salam added that while the current government should get as much reform done as possible, sign the MoU and prepare for IMF negotiations, “the IMF is for sure not giving any money before the parliamentary elections.”

The crisis over the port explosion investigation has escalated as the powerful Shia group Hezbollah and its ally Amal have pressed their demand for the removal of the lead investigator, whom they accuse of bias.

Mikati has held off convening cabinet sessions pending the outcome of political contacts over the issue, after postponing a session last week out of fear the row would escalate.

“Without a doubt the security events and the circumstances surrounding the port and the probe and Judge Bitar delayed us for two weeks,” Salam said.

“Every passing day is valuable,” he said.

“We are hoping to be back on schedule by next week.”

No one above the law, Myanmar junta minister says of Suu Kyi verdict 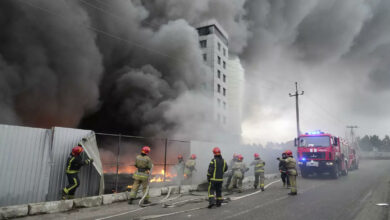