As Lebanon’s economy continues its steady decline and cabinet formation remains stalled, the country has been struck by another problem – a shortage of A4 paper has appeared at public departments and ministries.

Amid skeptical efforts by certain political parties that have been reportedly impeding Prime Minister designate Saad Hariri’s efforts to form a new cabinet, citizens have been left to suffer more and are forced to face further difficulties, the latest being bringing their own paper to government departments to that documents may be printed.

Various Lebanese departments and ministries have run out of paper, citing budget issues. The paper shortage is the latest example of government failure from the ruling class that for years has failed to provide its citizens with the most basic services, including 24-hour electricity.

Beirut resident, Hala Mahmoud, said when she went to pay her bill at a government department, the teller told her that she won’t get a receipt due to lack of A4 paper.

“I had to settle for an electronic invoice that was emailed to me … the teller said they were out of budget and haven’t purchased A4 papers for two months,” said Hala, smiling cynically in astonishment at the rate at which things have deteriorated. 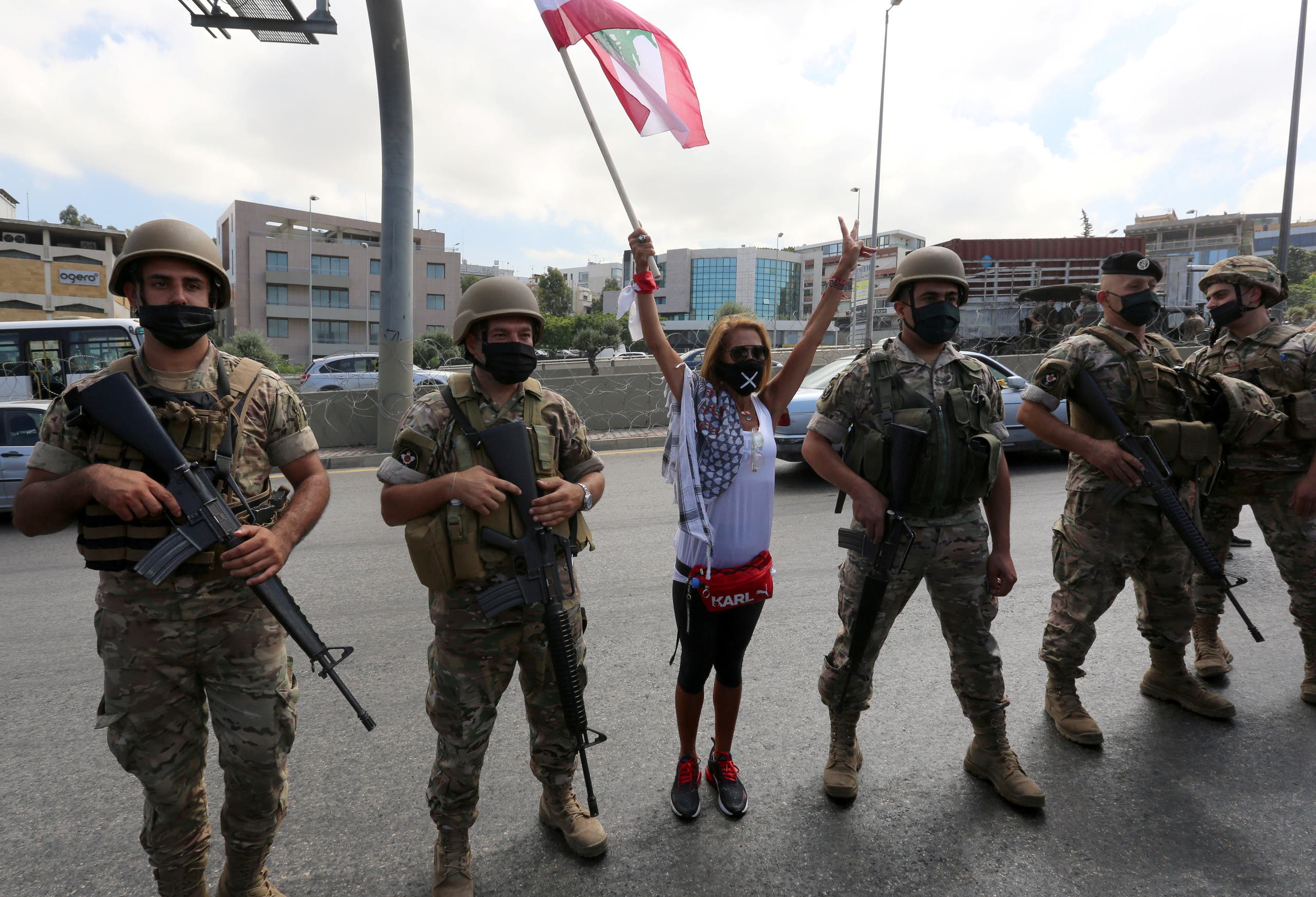 A demonstrator raises a Lebanese flag while standing between soldiers, during a protest against the government’s performance and worsening economic conditions, near the presidential palace in Baabda, Lebanon June 25, 2020. (Reuters)

An employee at one of the offices of the Telecommunication Ministry said employees of another department located in the same building come to them daily to print or photocopy invoices “because they do not have paper.”

However, Lebanese citizen Tony Maroun said as he left that building: “I came here to pay my bill and the teller told me to bring my own papers to print my invoice. I purchased A4 papers from the bookstore across the road. What a shameful thing!”

Another woman, Sandra Walid, said she felt seriously humiliated when she was told to purchase her own papers if she needed her invoice printed.

“Is this possible? A public department does not have budget to get papers for invoices! How bad could things go,” exclaimed Sandra, who purchased her own A4 paper pack for 25,000 Lebanese pounds (about $16 at the official exchange rate) from a nearby store.

When contacted by Al Arabiya English, an official at state telecom Ogero, who requested remain anonymous, said the A4 paper shortage is “very true” and it is common across most public departments and ministries.

“Our budget for A4 papers that we use to print telephone invoices is in Lebanese pounds. Meanwhile the price of A4 papers is invoiced in US dollar and since the rate has increased, our 2020 budget for papers couldn’t handle the rise,” underscored the official.

Import-dependent Lebanon has faced a dollar shortage since mid-2019, and where imports have to be paid for in US dollars, the country has begun to struggle to secure some basic goods.

When asked if one of the major Ogero branches had asked clients to bring their own paper, the official said he has not heard anything of the sort. 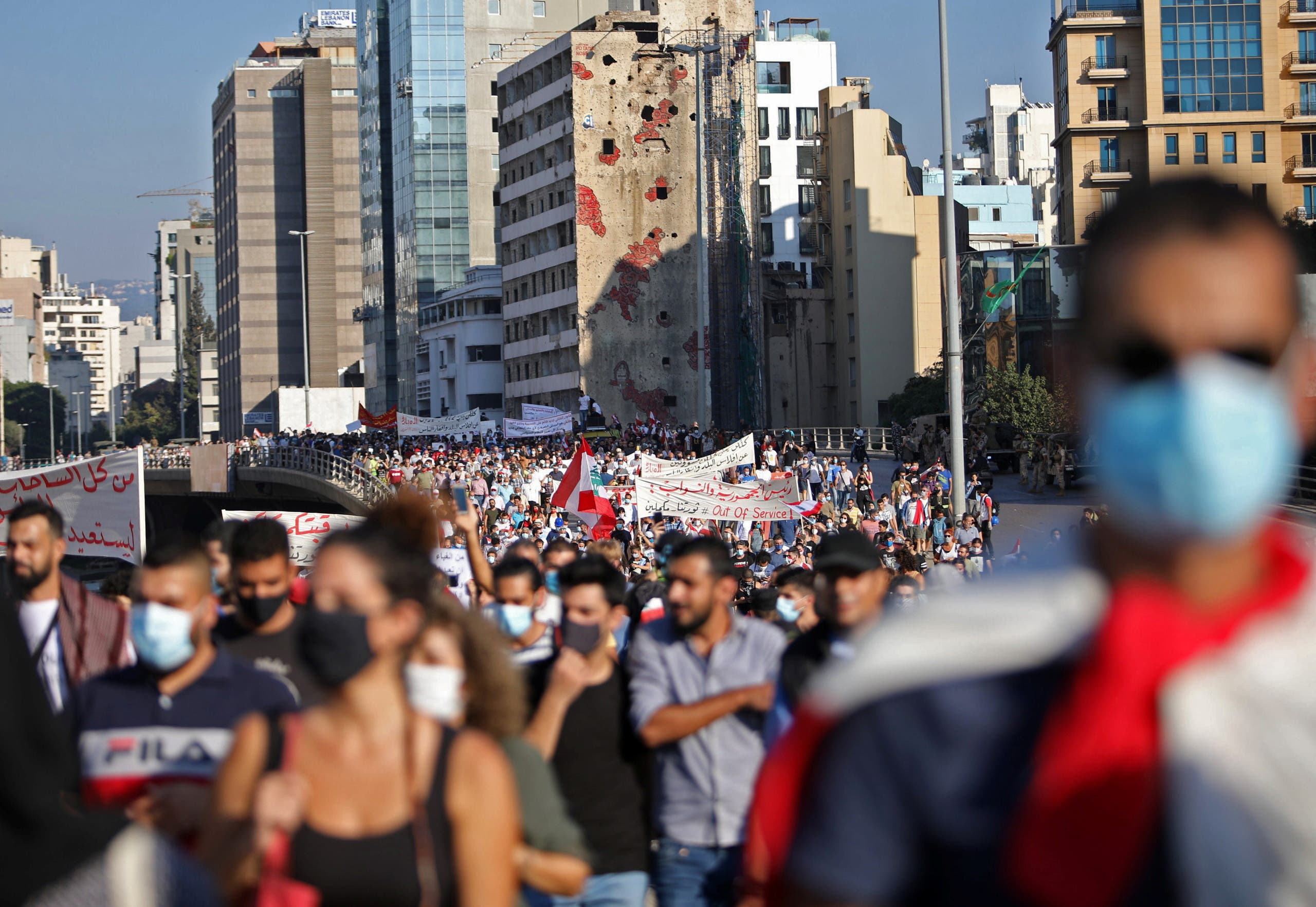 People march during a demonstration marking one year since the start of nation-wide protests in Beirut, Lebanon October 17, 2020. (Reuters)

When contacted, an executive at Dabbous Supplies named Mohammad said the public departments whom they provided with A4 paper have been paying them very late.

“The pack used to cost around $3 [4,500 pounds at old rate] and we used to sell for 5,000. Since the dollar crisis started prices went down nearly half a dollar. It now costs around 19,000 pounds, and we sell it for 21,000 pounds. Government departments pay in local currency. Since October 17 revolution started, followed by the economic and monetary crisis, the departments have been paying their bills very late … certain bills remained pending for few months,” according to Mohammad who added that the government bodies are suffering financially.

He confirmed that prices will continue to fluctuate as long as the dollar problem lingers as the A4 pack’s price has quadrupled in Lebanese pound, but decreased in dollar.

Claudine, who works at Diapaper distributors, said their company only provides the Lebanese Army with paper and they do not have any issues. However, she highlighted that the prices of A4 paper packs have been affected by the dollar’s market value.

One public servant who works at the Cabinet’s general directorate, who preferred to remain anonymous due to their position, told Al Arabiya English that several public offices have been using recycled papers [front and back] due to lack of budget to buy new paper.

“Our department has shortage in papers because we are out of budget. Prices have increased according to dollar increase and since the government budgets in local currency, we have been having noticeable shortage. We have been suffering in terms of print material and some stationery as well such as inkers, printers and others,” they said.