I’ve been working on the theme of Beirut for the past decade or more. I like to show, as much as I can, what’s happening on the political, social and personal side and put them all on the same scale.

The Egg was built by Joseph Philippe Karam in 1965. It had a lot of potential as an iconicbuilding, but it was never finished because of the civil war. Its walls are filled with bullet marks. 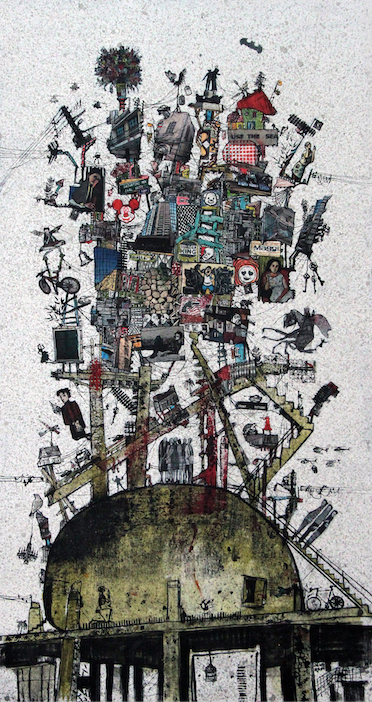 During the protests of October 17, it was reclaimed as a public space. Students, teachers, and activists were giving talks in it. It was a landmark being revived and giving hope that we felt throughout the protests.

I’ve constructed this base above the Egg because we were going through such instability in Lebanon. But there was hope. That&#39;s why I loved the stairs, which I emphasized, because you’re climbing up and going to a better future.

At the same time, with the structure, you feel it might crumble. This was a menace for the revolution the whole time: Will it survive? I liked playing with the fragility of the structure, whereas the Egg is solid — holding all this above it.

I wanted to show the contradictions of Lebanon. In the top corner, there’s a sexy woman putting lipstick on and then you have a different side — a history of the civil war and religion, which is one of the main sources of our conflicts. I put wings on people hovering around the city because we always have this presence of martyrs being recalled.

You have all these different cultures mixed up: There’s Maggi soup — very typical to the generation of the Seventies and Eighties — and then Twitter and Facebook connecting us to the outside world.

In Beirut, there are a lot of electric cables. The sky is blue, but it’s not clear. I had this urge to give this dusty feeling to the atmosphere, so I sprayed a haze layer just to be more truthful about the sky above us.

Embace Hotline: Calls From Lebanese Thinking of Suicide Spike to 600 Per Month

Egypt Aims to End The FGM Mutilation in Society

Shock Video: A Brit Throws a Punch at an African Woman on Board a Plane!

Tunisian Singer Causes Stir After Performing With an Israeli Artist