Dana Ballout, the Lebanese-American Emmy-nominated producer of “Trafficked with Mariana Zeller,” knows the exact moment she started paying attention to what was going on in the world. It was February 14, 2005.

Ballout was a senior in high school in Beirut, and as she sat in class that Valentine’s Day morning, a bomb went off just down the block, sending the building’s shatter-proof windows into convulsions. Lebanon’s recently-resigned prime minster, Rafic Hariri, had been assassinated.

Ballout had grown up in a household with a newspaper on the table every morning, and the television turned on every evening at precisely 8 p.m. to watch the news. It was her mother who had to know, but Ballout had always been annoyed by it. On that day, as she ran from her school trying to find her mother, something awakened inside her that would never leave.

“I couldn’t really reach my mom, and when I got to the apartment, thankfully, she was there. All the glass in my room was broken, so that night I slept next to her. That’s the day that I started watching the news with her,” Ballout tells Arab News.

On that day, Ballout first asked the question ‘Why?’ and has spent the last 16 years of her life chasing the answers. She spent years covering the war in Syria as a reporter for outlets including The Wall Street Journal, but it was in podcasts and documentaries that she fully found her voice, allowing her to journey in depth into people’s lives in a way she never could before.

“At the time I was covering Syria, it was constantly breaking news. I never got the chance to spend the time that I wanted with the people that I was writing about, which gave me a sense of guilt. I felt wasn’t really doing people justice. With documentary, I can now tell people’s stories the right way.”

Ballout is a storyteller, but the stories she chooses to tell are ones that few are brave enough to tell. Often they can be harrowing, including the latest documentary she co-produced, “Groomed,” which follows a woman returning to her hometown in search of answers about the man who abused her as a child.

In “Trafficked,” recently renewed for a third season at National Geographic, Ballout and company travel across the world to profile the global underworld, sitting down with the titans of illegal industries such as scamming, steroids, counterfeiting and poaching.

“The stories I’ve told for most of my career are the ones that are difficult for people to look directly at. For some reason, I’m drawn to them. I’ve covered war, terrorism, abuse, the refugee crisis, and criminal networks, interviewing people that society would prefer to ignore,” Ballout says.

“I think it’s important to look what we deem evil or bad in the face and try and understand it,” she continues. “I think we’d be better off as a society if we didn’t try and shun these people and instead figured out how they became this way. Sometimes you’ll find things you weren’t expecting. I’ve found that in the darkest corners, there’s a lot of light; there’s so much hope for humanity. I’ve found beautiful stories of human resilience in places other people didn’t dare to go. It’s what inspires me to keep going.”

Ballout’s years growing up in Lebanon often brought her face to face with the underground world of the black market — a part of many people’s daily lives after the Civil War.

“Meeting these people out of necessity growing up, I learned that the people that operate in these underground worlds instead of the legitimate business world do so not because of a lack of intelligence or entrepreneurship, but because they are intelligent. They’re just playing the hand that life dealt them. It’s a matter of different circumstances, different places, and different privileges,” says Ballout.

While documentary is her primary focus, Ballout’s heart will always lie most deeply in the world of podcasting, a medium she first fell in love with while listening to the popular American radio show “This American Life” which chronicles the stories of everyday people. She has contributed regularly to the podcast network Kerning Cultures, founded in Dubai in 2015 by Hebah Fisher and Razan Alzayani, since its inception.

No matter how busy she gets, it’s a job she’ll never leave. After all, it was there that she first told a story she was truly proud of, a story she excitedly sent to her mother the second she finished, a moment when she finally found her voice.

“It was about a graffiti artist that had drawn a mural of Sabah, the iconic Lebanese singer. Honestly, the radio story wasn’t that great, but it was the first time where I felt I told a human story in a creative way, about the people that I grew up with on the street. It was a story that came out of my bones. That’s when I became more confident in telling stories that I felt strongly about,” she says.

Ballout continues to expand her contribution to the medium, writing and producing her own podcast documentary series, “The Messenger,” released earlier this year, about a corrupt Ugandan leader and the country’s biggest popstar who is leading a movement to overthrow him, which has garnered huge acclaim from outlets including the New Yorker.

Ballout is also venturing into fiction, producing the film “The Falconer,” shot entirely in Oman and directed by American filmmakers Seanne Winslow and Adam Sjoberg. The film, currently on the festival circuit, follows the son of a beekeeper who attempts to steal the animals from a zoo and sell them to save his sister from an abusive marriage, putting him in direct conflict with his best friend, a privileged Westerner.

With the film, Ballout is hoping to set a new model for how American filmmakers can work with the region, telling more accurate, human-centered stories that take inspiration from the Middle East and working with Arab filmmakers in order to tell them.

“The region is so rich in so many things, from talent to topography. The region is perfectly capable of being a hub for creative endeavors, wherever they might come from,” says Ballout.

Through all her endeavors, there has been one constant, the person who inspired her to become more curious to begin with, her mother, Ghada Richani, who has been her backbone, inspiring her to dig deeper, pushing her to get better, even acting as a translator and camera assistant in foreign countries.

“I get my storytelling from her. Every day, she continues to be my inspiration, and my right hand. I love her so much, and I wouldn’t be the person I am today without her,” says Ballout.

It’s been 16 years since Ballout finally understood why her mother was so curious about the world, curious about every taxi driver that they met. Now, with her mother by her side (they live together in Los Angeles), Ballout has become one of the Arab world’s most-important chroniclers of everyday lives, a mission she will surely continue for many decades to come.

Cold Turkey is a Haven For Tropical Birds 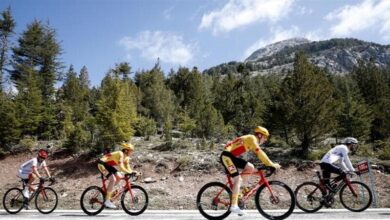 Jill Magi and ‘The Weft in Pencil’: Story of words, printed page, and textiles