Kylie Jenner suffered an awkward mishap while filming a Drunk Get Ready With Me video with Kendall Jenner on Tuesday evening.

Kendall, 25, couldn’t resist uploading a video to her Insta stories of the make-up mogul, 23, laughing hysterically repeatedly saying ‘I peed my pants’.

Kylie appeared to have accidentally wet herself after looking at her make-up transformation in the mirror, with the usually picture-perfect star sporting purple lipstick, a blonde hair extension and yellow blusher.

The KUWTK star tried to cover her face with her hand as she continued to laugh while Kendall filmed.

The tipsy pair had been downing tequila from Kendall’s new line 818 while experimenting with make-up from Kylie’s range.

In a follow up snapshot, Kylie seemingly promoted Kendall’s 818 line as she showed off their drinking set-up for the shoot.

There were various bottles of 818 tequila, a bowl of lime slices, and a bowl of salt with a spoon to sprinkle it onto the limes for taking shots.

She continued to upload various pictures and videos from her laugh-filled filming session with Kendall to her Instagram Story.

Like many of ‘Drunk Get Ready With Me’ videos on YouTube, the makeup almost never turns out as planned, with most creators looking far from ‘put together’ by the video’s end.

And Kylie captured a video of Kendall’s ‘final’ look, which the model showed off with pride for the camera.

Kendall’s makeup, at first, looked worthy of a red carpet and featured a flattering peach lip, a colorful eyeshadow look, and a generous amount of blush.

But Kylie definitely raised some eyebrows in a follow-up clip that showed Kendall sporting a much less flattering makeup look that consisted off an unblended nose highlight and an overuse of hot pink blush.

In the clip, Kendall can be seen wiping something off her tongue with haste, remarking to her sister: ‘It’s burning my tongue!!! What’s in this s**t?!’ 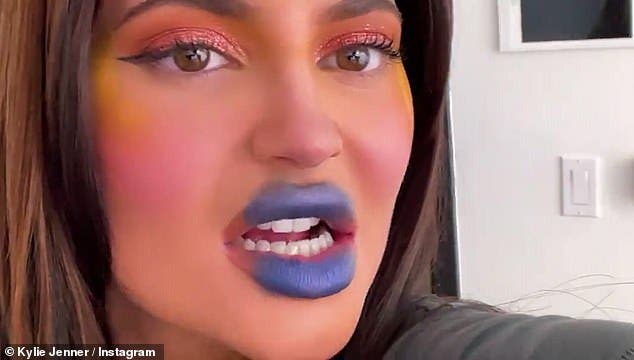 Always one to poke fun at herself, the Kylie Cosmetics CEO also made sure to show off her own completed look with her 218million followers, which featured a bright purple lip, yellow highlighter on her cheekbones, and glittery eyeshadow.

Kylie zoomed in and out on her face, before flashing her teeth – and tongue- for the camera.

Following the completion of their video, the sisters made their way around Kylie’s vast Kylie Cosmetics headquarters.

Clearly a little buzzed from filming, the pair tripped over one another and rolled around on a white backdrop as Kylie’s pup Kevin attempted to get in on the laugh-filled action.

With Kylie’s assistant behind the wheel, Kylie and Kendall hopped into a neon orange luxury vehicle and made their way towards the nearest McDonalds.

As they pulled up to the drive-thru, Kylie explained to her Instagram followers that she has not actually been to a McDonalds since ‘two weeks before’ giving birth to her daughter Stormi, who is now aged three.

‘I love McDonalds, so this is a really big deal for me,’ she admitted, before ordering a 10-piece Spicy McNuggets, two large french fries, two cinnamon rolls, and two fountain drinks.

Once they received their food, Kylie decided to rate all of the items in their order, with the cinnamon rolls earning the highest score of 9 out of 10.

After hitting up McDonalds, Kylie, Kendall, and her assistant grabbed some delicious burgers at a nearby In N Out, which they also proudly showed off on their Instagram Stories.

Despite all the hoopla on Instagram, Kylie and Kendall did NOT reveal when their highly anticipated YouTube collaboration will premiere on Kylie’s channel. Demi Lovato is back, and this time she’s angry Messi says signing for PSG a ‘possibility’ after Barcelona exit