Fear, panic and discrimination is rampant around the world as the number of deaths and cases of COVID-19 rises every day. Several doctors and health professionals have advised the public that it is not necessary to wear masks while walking on the streets, on the bus or at restaurants. Yet people are wearing them anyway just in case.

“I don’t like to appear as if I am the only one not wearing it, so if I am using public transportation, I wear a mask, not because I am afraid of the virus, but because I am afraid of what people might think when I am not wearing it,” a regular bus passenger told Kuwait Times yesterday. “I don’t want to wear a mask because I heard the virus is not airborne, but people are wearing it, and I don’t want to be different from them. So I bought the facemask even though it was expensive,” she added.

Facemask prices have soared, and most pharmacies are not selling them as they have run out of stocks, along with those of sanitizers and rubbing alcohol. “I wanted to buy a facemask, sanitizer and alcohol, but many pharmacies all over Kuwait are no longer selling them,” a woman said. “So I was happy when I approached a salesperson at a large grocery store in Salmiya and asked for a sanitizer. Initially they told me stocks were over, but when I pressed and said I have a baby to protect, the salesperson pitied me and gave me two bottles. They said they have been keeping it in storage because when they put them on the shelf, they are all gone within a few minutes,” she told Kuwait Times.

Some people said panic was created by the government too, when it ordered workers at all restaurants and cafes to wear facemasks and gloves. “The problem with this order is not the use of a facemask or gloves – the problem is when they use them but not follow the right instruction,” a customer said. “What if the facemask is not changed for hours? What if they touch their mask and touch my food? What if they touch my food without cleaning their hands, or if the gloves are not changed often?” she asked.

All shisha cafes have also been closed in an effort to prevent the spread of the coronavirus. Schools have been suspended and some flights have been halted. All over Kuwait, the behavior and attitude of people and the way they are communicating with each other has changed. Greeting by kissing and shaking hands is no longer acceptable. People now keep a calculated distance, especially with strangers. Sporting activities are also on hold, such as football and basketball matches and zumba and karate classes. 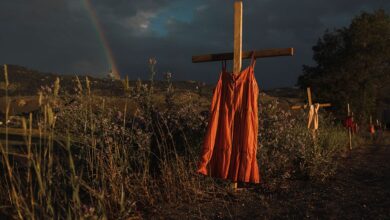