Kurdish authorities said they transferred 21 orphans from a squalid displacement camp in northeast Syria on Saturday, including two French children who are set to be repatriated.

The children, including some from France, Egypt and Dagestan, were only a fraction of the 224 orphans living in al-Hol camp, home to thousands of relatives of ISIS fighters.

They were transferred to the Kurdish-run settlement of Roj, also in northeast Syria, said Jaber Mustafa, an official at al-Hol.

He did not say why only 21 orphans were being transferred but argued that Roj is better equipped to host orphans.

“The child care centers in Al-Hol lack many basic services,” including trained specialists and educators, he said.

Two French orphans are among those being transferred, said another camp official who asked not to be named because he was not authorized to speak on the issue.

They will be handed to a representative of the French government who will then repatriate them, the official added, without providing a timeline.

The repatriation, according to the official, is taking place at the request of Paris.

Kurdish authorities say they are holding around 12,000 foreigners from countries other than Iraq, including 4,000 women and 8,000 children, in three displacement camps in northeastern Syria. The majority are being held in al-Hol. 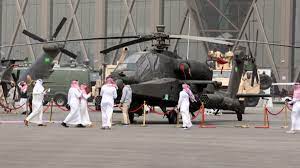 US approves sale of $650 mln in air-to-air missiles: State Department