And the TV personality’s new collection made one million US dollars within the first minute of its launch which was on Tuesday, and most of the items on the websites are sold out.

this launch is considered to be Kardashian’s most successful launch.

The new collection features dresses and tops that start at a price of $950, leggings for $1,100 and the collection also features a $2,950 puffer jacket, and a $100 hoisery bra which is currently sold out in all colors and sizes.

The collection also includes swimsuits and a leather dress which is offered in eight shades and is selling for $4,200.

Kardashian launched SKIMs back in September 2019, and this past June, it was valued at $1.6 billion dollars.

The mother of four began working with Fendi artistic director Kim Jones after hearing women in his office saying she ‘liked her garments’, and the duo began discussing the collaboration in December of 2020.

The news comes after Kim issued a statement offering her condolences to the victims of Travis Scott’s Astroworld Music Festival crowd surge which ended up with 8 people dead and many injured. 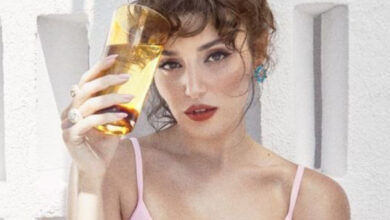 Hande Erçel Reveals Many Secrets to ELLE Türkiye.. But What About Kerem Bürsin?!