Kim Kardashian left her followers more baffled than ever after sharing a video of her feet to ‘prove’ that she only has five toes.

Fans have long speculated that she has a sixth toe on her left foot since it seemed there was an extra toe in certain promotional photoshoots.

But the Keeping Up With the Kardashians star attempted to clear the air once and for all video taping her foot and counting out each toe.

In a series of videos posted to her Instagram story on Wednesday night, the 39-year-old called the theory she has an extra toe ‘really wild.’

‘Everyone thinks that I have six toes, and it’s really wild,’ she said while filming her foot. 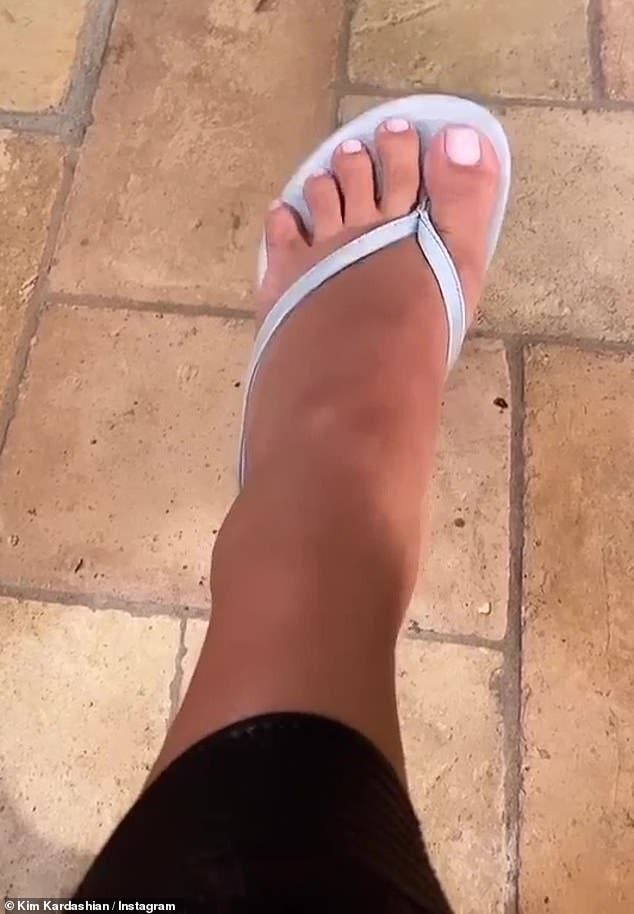 After counting her toes, noting there are only five, she pointed out it is part of the side and bottom of her foot that when pushed down in an open toed shoe can look like an extra foot digit.

‘But it’s this, part of my foot, that when I wear a shoe just like this it like smashes down right here and in a picture,’ Kim said. ‘I don’t know why, it looks like a sixth toe.’

She captioned the video, ‘very baffling.’

She went on to film a selfie video with her hair up in her signature sleek waterfall look.

‘I hope that answered my sixth toe question,’ Kim said. ‘Because I only have five toes on each foot.’

She seemed to be enjoying time with friends as they could be hear loudly in the back, as she recorded herself in full glam makeup.

After the clip was shared, fans rushed to Twitter to express their bemusement, penning: ‘Wait so does Kim kardashian have 6 toes or nah?’; ‘@KimKardashian how many toes you got?’

‘Ok now I can sleep now that @KimKardashian has proven to us she only has 5 toes and not 6. Goodnight’; ‘@KimKardashian is so funny! Literally dying at the post on her ig story about her “sixth” toe’;

Last year while promoting the Kylie Jenner by KKW fragrance collaboration with her little sister, fans thought they spotted a Photoshop fail or an extra toe all together.

Comments began calling out what appeared to be a Photoshop fail, with one fan joking, ‘why you got six toes?’

But it was Kim’s left foot that caught fans’ attention.

The TV personality wore clear stilettos on her one exposed foot – and it certainly looked like she had an extra digit.

‘Am I tripping or does Kim have 6 toes? Someone explain, I’m so confused! I counted so many times,’ another user said.

Justin Bieber Reveals He And Hailey Have Sex all Day

Kim Kardashian Turns up The Heat in New Bikini Photos