Kerry Katona showcased her eye-popping cleavage in a racy black corset as she posed for a sizzling Instagram snap.

The TV personality, 41, looked incredible in a plunging black corset as she seductively leaned against a wall for the post.

Kerry, who recently underwent a breast reduction, exuded confidence as she posed up a storm in the jaw-dropping lingerie.

Kerry proudly showcased her new cleavage in the sexy plunging corset which highlighted her curves.

The star captioned her post: ‘The show must go on.’

It comes after Kerry and her daughter Lilly-Sue McFadden detailed how bullying has had a devastating impact upon their family.

The singer broke down in tears on Steph’s Packed Lunch on Thursday as her influencer daughter, 18, revealed she was plagued with insults due to her famous mum’s ever-public personal life.

‘I feel to blame because the bullying is because of who their parent is. Makes me feel a failure as a mum,’ the former Atomic Kitten bandmember croaked through tears.

Claiming that bullying follows her family around, Kerry added: ‘My children have been hit, they’ve had abuse face to face, they’ve had a lot of it online…

‘It’s heartbreaking. As a parent you feel helpless. I feel to blame because the bullying is because of who their parent is. So that all makes me feel a failure as a mum…

The daughter of Westlife star Brian McFadden added: ‘It genuinely enrages me. I’m quite lucky because I’ve got thick skin… but it doesn’t mean that it doesn’t hurt. It’s just name calling, it’s really petty, silly things that does affect you, it builds up.’

After incidents in the playground caused her to head home ‘absolutely raging’, Lilly claimed her infamously feisty mum would sit while bawling her eyes out saying, ‘This is my fault.’

‘And we’ve told you it’s not,’ Lillie insisted.

She is now engaged to Ryan Mahoney, 32, after they met on a dating app, and has had her every move documented by a plethora of tabloids over her 23-year-long career.

Also, in the VT, Kerry and Lilly met a 10-year-old who was severely affected by bullying, to hear how she has overcome her experiences. They also heard from Louisa Rose, CEO of bullying charity Beyond.

To see the full interview with Kerry and Lilly, tune into Steph’s Packed Lunch on Thursday at 12.30pm on Channel 4 and All 4. 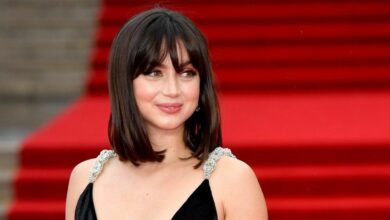 Jameela Jamil Opens up About Trying to Commit Suicide