The jury in the trial of former Minneapolis police officer Derek Chauvin over the murder of Black man George Floyd has begun to consider its verdict, with the city of Minneapolis on edge ahead of the decision.

The court heard closing arguments on Monday, with prosecutor Steve Schleicher summarising the state’s position that Chauvin used excessive force when he kept his knee on Floyd’s neck for nine minutes and 29 seconds last May.

Schleicher urged the jury to “believe your eyes”, referring to the graphic video of the incident that was seen around the world and fuelled global protests.

The 46-year-old Floyd, who had been accused of using a counterfeit $20 bill to buy cigarettes, was being pressed against the “unyielding pavement … as unyielding as the men who held him down”.

Schleicher concluded: “This wasn’t policing. This was murder. The defendant is guilty of all three counts, all of them. And there’s no excuse.”

Defence lawyer Eric Nelson again tried to plant seeds of doubt in the jury, pointing to the testimony of expert witnesses who said Chauvin, who is white, acted appropriately.

Nelson also cited Floyd’s pre-existing health issues and drug use as the real cause of death.

“We have to analyse this case from the perspective of a reasonable police officer at the precise moment, with the totality of the circumstances, when it comes to the use of force,” Nelson told the jury.

Jerry Blackwell, a prosecution lawyer lauded for his compassion during the trial, offered a rebuttal.

The 45-year-old Chauvin faces charges of second-degree murder, third-degree murder and manslaughter. The jury have been sequestered to a secure location where they can deliberate on the charges and evaluate the strength of the prosecution and defence arguments.

US Congresswomen Ilhan Omar, who represents a Minnesota district, and Joyce Beatty, chair of the Congressional Black Caucus, participated in a short news conference outside the court on Monday afternoon.

“We come today in solidarity with the Floyd family,” Beatty told reporters.

Tensions have been running high in Minneapolis.

Government buildings and some storefronts have boarded up their windows in anticipation of unrest after the verdict and closed early the night before the trial.

National Guard troops have taken up positions along busy thoroughfares throughout the city. 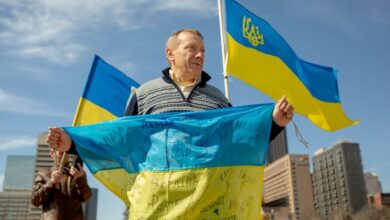