In the wise words of Beyoncé, never drop that alcohol.

In an appearance on Wednesday’s The Late Late Show with James Corden, January Jones, along with John Cena and James Corden, played a game of “Flinch.” The premise: each star would take turns standing behind a protective glass wall while holding a martini. The other players would then load a small canon with fruit that would be shot at the glass wall at random. Whomever spilled the least of their martini would be the victor.

First up was Cena, who was extremely confident he wouldn’t flinch because, as he described it, “I’m dead inside.” Turns out, he wasn’t as dead as he thought, as the second Corden shot the canon, the WWE alum jumped and screamed and spilled his entire drink.

Next up was Jones, who, unlike Cena, had zero confidence she could remain unyielding. Even as she walked behind the glass and got herself ready, she spilled some of her drink twice.

Before the fruit was propelled at the wall, Corden said, “You are looking very, very cool. There’s no doubt about it. Oh, look, the hand on the hip!”

Striking a glamorous, very Betty Draper-like pose, the star responded, “I was in Mad Men, I know.”

Jones then went on to describe how easily she flinches at things, but that all seemed to be an act, as The Politician actress hardly moved an inch when the fruit came flying at her. And not a drop of liquor fell from her martini.

Then it was Corden’s turn. As he quipped, “Good luck, I’m a master at this.”

After Cena loaded the canon, Jones instructed him to distract Corden with some dance moves. She hid the trigger behind her back and waited for the most opportune moment to scare the host.

John Cena Answers Rapid Fire Questions
As she teased, “It’s broken!” Then she fired off the canon immediately, and Corden’s drink went flying.

This just goes to show that one must never doubt Betty Draper’s commitment to her liquor. KISS Will Perform in Dubai This New Year’s Eve 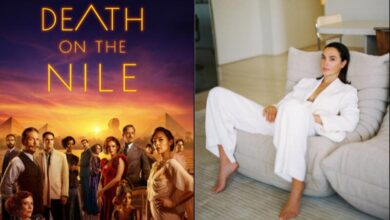 Why is Kuwait Banning The Agatha Christie’ Movie of Death on The Nile?