The 39-year-old actress was “prepared” for her six-year-old daughter Everly – whom she has with her ex-husband Channing Tatum – to be “jealous” after she gave birth to new arrival Callum in March.

But Jenna – who has Callum with her fiancé Steve Kazee – need not worry, as she says her daughter has “stepped into her big sister role” with ease.

She said: “I prepared for everything. I thought maybe jealousy, maybe ignoring, you never know how it’s going to go. We do a little bedtime routine every night. She reads him a story. She’s really embraced it and stepped into her big sister role, quite well I have to say.”

The ‘Step Up’ actress also gushed over her beau and his “amazing” fatherhood skills, as she said the pair are becoming pros at tackling parenting amid the coronavirus pandemic.

Speaking during a remote appearance on ‘The Talk’, she added: “He is amazing. He really helps out so much every morning. I’m up breastfeeding three times a night, so he wakes up, he takes the baby. I get that extra hour and half, two hours to sleep in the morning … he’s just stepped into ‘new dad’ beautifully, like it’s shocking me.”

Jenna’s comments come just days after Steve took to social media to praise his son as “the brightest light in this darkest hour”.

He wrote: “My beautiful boy. I hope you see this someday and know that your daddy loves you better than anything in this world and that, to him, you are the brightest light in this darkest hour. You give me hope. You give me love. You give me everything. I will never stop trying to give you all that and more in return. I love you son! Happy 2 months Callum! (sic)” 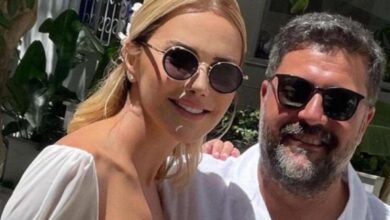