Japan’s recovery from its worst post-war recession slowed in the fourth quarter, a sign that households and companies have yet to fully shake off the economic hit from the coronavirus pandemic, although the pace of growth was stronger than expected.

The data underscores the challenge policymakers face in keeping the economy afloat amid emergency measures to prevent the spread of COVID-19.

The world’s third-largest economy grew by an annualised 12.7 percent in October-December compared with the previous three months, government data showed on Monday, marking the second-straight quarter of expansion and exceeding a median market forecast for a 9.5 percent gain.

The growth rate was a marked slowdown from a revised 22.7 percent surge in the previous quarter, when the economy got a lift from pent-up demand after a previous state of emergency was lifted in May.

And over the full coronavirus-stricken year, Japan’s economy contracted by 4.8 percent, marking the first annual fall since 2009.

A global rebound in manufacturing activity gave Japan’s exports a much-needed boost, especially to China, making up for some of the weakness in domestic demand, the data showed.External demand, or exports minus imports, added 1.0 percentage point to the fourth-quarter GDP growth rate, matching a median market forecast.

Private consumption, which makes up more than half of Japan’s economy, rose by 2.2 percent after a 5.1 percent increase in the previous quarter. That compared with market forecasts for a 1.8 percent gain.

Japan’s economy has gradually emerged from last year’s initial state of emergency curbs thanks to a rebound in exports.

But the government’s decision to roll out new restrictions from January has heightened the chance of another recession, clouding the outlook for a fragile recovery.

How long the state of emergency lasts is a key factor for the outlook. Falling COVID-19 case numbers offer hope that restrictions might be lifted in some areas before March 7, the planned end-date but with hospital capacity still stretched that decision has yet to come. Japan’s vaccine drive is not set to start until Wednesday.

Prime Minister Yoshihide Suga in December unveiled a $700bn stimulus package that should already have started feeding into the economy. So far, government loan guarantees and furlough subsidies have helped keep unemployment down to 2.9 percent and cut bankruptcies.

“Looking ahead to [the first quarter of] 2021, we see GDP falling back into contraction again, hit by a fresh round of containment measures in the second state of emergency called in January,” said Yuki Masujima, an economist at the Bloomberg news agency.

“High-frequency data show business activity retreating in January and early February. But the economy could see a bounce in 2Q, assuming the virus is brought under control,” Masujima said.

But some economists are more optimistic, with strong external demand for Japanese products expected to continue to give factories a boost and government stimulus programmes seen supporting domestic consumption.

“The consensus is that the economy will shrink by 5.0 percent annualised in [the first quarter] as the second state of emergency declared on January 7 weighs on demand,” Marcel Thieliant, a senior Japan economist at research firm Capital Economics said in a note sent to Al Jazeera. “By contrast, we believe that output will be broadly flat,” he added.

“Data for the first twenty days of January show the largest annual rise in export values since 2018, though some of that strength seems to reflect shifts in the timing of the lunar new year.” Are COVID booster shots needed? Here’s what you should know 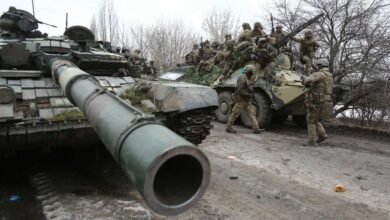 When will the war in Ukraine end? What is next for Italy after Prime Minister Draghi’s resignation?